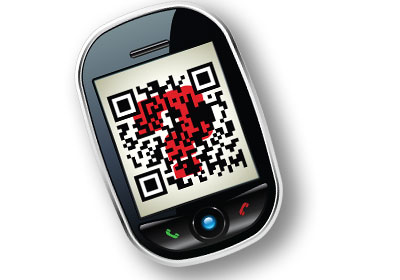 A trendy mobile marketing tool is driving consumers to deals, details, and some disappointment, too.
March 11, 2012

At 6 a.m. on Black Friday morning, 100 shoppers at the Mall of America aimed their mobile phones at a 50-by-30-foot MOA logo on the rotunda floor.

The logo had 100 squares, each with a unique pattern, embedded in it. Within seconds, a prize appeared on each shopper’s smartphone screen, ranging from a $25 store credit to a $1,000 shopping spree. No elbow throwing necessary.

The promotion was inspired by a question to the mall’s digital brand manager, Lisa Grimm, from her 57-year-old mother: What are those little black-and-white square things I keep seeing?

They’re called QR codes—short for quick response—and they’ve become a trendy tool for marketers trying to drive mobile-phone–carrying consumers to Web pages. “If my mom is starting to see these things and actually have enough curiosity to ask me about them, then something’s up,” Grimm says.

The mall’s Black Friday promotion was one of the Twin Cities’ largest QR code experiments, but the pixelated blocks are turning up everywhere, from billboards and business cards to magazine ads and store windows.

The codes can be scanned like a barcode using a smartphone app. Some are using them to direct consumers to deals or contests. Others are offering up video or other content. Many of the codes, though, lead to disappointment by loading links with little or no apparent value to the people scanning them. That has some questioning QR codes’ future.

“The foundation is laid for them to be able to take off—if we marketers don’t kill them off first,” says David Erickson, director of e-strategy for strategic communications firm Tunheim. Even though the use of QR codes is growing, a glut of poorly thought out uses could lead consumers to decide they’re not worth the bother.

The percentage of U.S. adults who scan QR codes grew to 5 percent in 2011 compared to just 1 percent in 2010, according to Forrester Research. Meanwhile, the number of companies incorporating QR codes into their marketing campaigns has skyrocketed during the last 18 months. A December 2010 study by Burson-Marsteller found 22 percent of Fortune 50 companies were experimenting with QR code marketing. Print media and in-store displays are among the most common places they appear.

Best Buy shoppers can scan the codes  on shelf tags to pull up more detailed product information. Edina-based Parasole Restaurants turned its Lake Street billboard for Chino Latino into a giant QR code, which directs people to promotional videos and special deals. Tunheim Partners turned its logo into a QR code for use on business cards and in presentations. The firm can change where the link takes users, updating it for special events or promotions.

“Once you learn about what they are, you start seeing them everywhere,” Erickson says.

QR codes are the “new shiny object” to marketers, Erickson says. But the technology has been around for almost two decades. The codes were invented in Japan in 1994 by a subsidiary of Toyota, which used the codes to track vehicles through the manufacturing process.

The codes can hold more information in less space than traditional bar codes. They can also store more types of information. Instead of numbers only, they can contain letters, symbols, and binary code.

QR codes are mainstream in the Asia-Pacific region, where mobile phone penetration is higher than in the United States. Among the creative QR code uses there: a virtual Tesco store that lets people order groceries for delivery by scanning QR codes on a South Korean subway station wall.

One factor working against QR code adoption is that it’s a “high-friction experience,” says entrepreneur and strategist Joseph Rueter. A person needs to own a smartphone, download a scanner app, and then take time to pull out their phone, scan the code, and view or download the content.

Is it really worth the hassle?

In most cases, no, according to a survey by Minneapolis creative marketing and research firm Russell Herder, which asked 500 U.S. adults in August 2011 about their awareness and attitudes about QR codes. Their findings: Nearly three in 10 people did not know what a QR code was. That included nearly one in five people who regularly go on line via their mobile phone.

Of those who have scanned a QR code, only 31 percent said what they received was usually worth their time. “I think they’re extremely overhyped,” says Arik Hanson, a digital communications consultant and principal of Minneapolis-based ACH Communications. “I’ve seen very few, if any, executions that make sense from the customer point of view.”

Hanson spent Black Friday scanning QR codes at retailers in the Mall of America to see whether his low opinion of QR codes was fair. What he found didn’t change his mind. Signs didn’t tell customers what they would receive for scanning. Some connected him to websites that weren’t formatted for viewing on mobile phones. One, Macy’s, went to a file-not-found error page.

“I think most brands jump into this stuff without thinking through the user experience part of it at all. It just seems like an easy add-on for them,” Hanson says.

Lisa Foote, CEO of Minneapolis mobile marketing shop MixMobi, has seen plenty of half-baked QR campaigns, too. “The most common mistake that one sees today is companies simply taking their regular main company website and creating a QR for it, and then slapping that on,” Foote says. “It’s a very disappointing experience for the business customer or for the consumer. Quite frankly, there’s nothing special there.”

That said, Foote believes there is a way for marketers to do QR codes right. It starts with making sure you’re offering users something of value. Examples might include a deal or coupon, a free sample, or a chance to enter a contest. It could be useful information, or it could be entertainment.

MixMobi, for example, helped Parasole run a promotion when it opened a new Burger Jones restaurant in Burnsville. Customers who scanned a QR code were sent to a mobile Web page where they could enter a contest. The restaurant collected 2,000 customer e-mail addresses in its first two months.

“It’s a smart and clever way to get someone to a very specific online location in a hurry,” says Carson Kipfer, cofounder of TST Media, which designs and creates digital tools for sports and other organizations, many of which host tournaments. QR codes have been a good way to get players, parents, spectators, and others information such as team schedules or statistics, where getting a direct link is easier than navigating through a mobile home page to the information.

“I think if they’re utilized in the correct way and put in environments that make sense, then you’re going to get some great value out of them,” Kipfer says. “We encourage [clients] to really analyze the information that they are trying to point people to via the QR codes and ask themselves the question, ‘Is this useful within this environment or scenario?’”

Another important consideration in this stage of the technology: education. When the Mall of America promoted its “Snap + Win” holiday QR code contest, which kicked off on Black Friday, it included in its video and printed materials instructions on how to use a QR code, starting with downloading an app. “Everywhere you turned, we really wanted you to know how to use a QR code,” Grimm says.

The Future, or Just a Fad?

Some are already forecasting or proclaiming the death of QR codes, especially since Google dropped support for the codes from its Google Places app last March.

“Ultimately, I think this is a transitional technology,” says Tunheim’s Erickson. “I think the behavior of scanning your environment for more information will continue.”

Erickson points to Google’s visual search app, called Goggles, which allows users to search the Web using images from their camera. Snap a picture of a restaurant, and if it recognizes it, it can give you reviews, offers, and other information.

Near-field communication, or NFC, is another technology that’s frequently mentioned as a QR code successor. It’s the same technology that’s used in wave-and-pay contact-less payment systems. Foote points out, though, that NFC requires embedding a physical chip and can’t be read by almost all existing mobile phones. They’re not as practical as QR codes when it comes to things like print media, Foote says.

For now, though, QR codes have an edge. Adoption skews younger and male, but the crowd that lined up at the Mall of America’s rotunda on Black Friday was more diverse than you might guess, ranging from tweens and twentysomethings to women in their 50s, Grimm says. The first 300 people got to randomly draw a wristband, which allowed them to scan a specific code at either 6, 7, or 8 a.m. Each hour, the prizes behind the codes shuffled (using a MixMobi technology called Timeboxing, which allows QR code creators to schedule changes to where the links direct scanners).

The mall raffled off another $1,000 shopping spree in a QR code contest that ran from Black Friday until Christmas Eve. Shoppers could scan QR codes that were featured throughout the mall, on doors, food court tables, and video displays, and fill out a mobile entry form on their phone.

Grimm was not a fan of QR codes before the experiment. (“My opinion was very low because so few people executed correctly,” she says.) The mall was still evaluating the promotion, but Grimm thinks they will probably continue to experiment.

“It’s not the be-all-end-all, and it will be something that complements other marketing initiatives for us,” Grimm says. But based on the amount of interest in QR codes in recent months, “I think they’re going to be a tool that people continue to use for a while.”