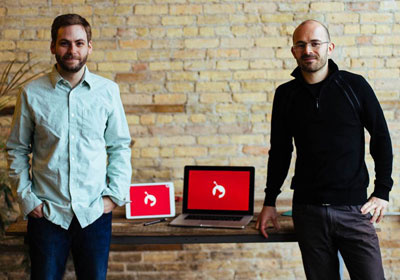 A company shaking up the design world at a fraction of the competitors' costs.
By TCB Staff
October 08, 2015

Astropad is ambitious. Founded by two tireless 30-somethings based out of Minneapolis and San Francisco, the fledgling tech company has its sights set high: Not content to be number two in the niche graphic design tablet industry, they’re selling a product that transforms an iPad into a graphics powerhouse for under $30—a far cry from the thousands for a comparable device from industry top-dog Wacom. Still in frenzy and afterglow of winning the top slot in the Minnesota Cup, a statewide entrepreneurial competition, cofounder and CEO Matt Ronge talked with TCB about how the company came to be, why the Minnesota Cup is beneficial and his thoughts on the Twin Cities tech scene.

Note: This interview has been lightly edited for clarity and length.

What is Astropad’s origin story?
My business partner, Giovanni Donelli, was out for a run when he saw an ad for a Microsoft Surface. In the ad, they were drawing right on the screen and he thought, “You know, that’s really cool. I wish I could do that, but I don’t want to buy another device. He had the idea of using an iPad. We spent the next year and a half trying to get it to work. It turned out being much harder than we expected. That’s why nobody else had really been successful doing it. We released it in February, and it turns out that a lot of people had been waiting for something like this. We had built this thing and knew we wanted it for ourselves, but we weren’t sure if anyone else would. But then it took off and a lot of people were sharing it on social media. That’s when we decided to go full time and make it into a real business.

What was wrong with the current products on the market?
If you wanted to do professional-quality art on the computer, you needed to go out and buy specialty hardware made by [graphics tablet maker] Wacom. These devices are either really difficult to use or incredibly expensive, costing thousands of dollars. We wanted to come up with another option where you could draw on the computer, but using a device that artists already have like an iPad. It gives the same experience as the expensive, dedicated graphics tablets that you’d normally buy from Wacom.

Has anyone big used your project?
We’ve had an artist at Pixar play around with it, we’ve had someone at Disney or Sony using it, we’ve had an animator and director in Hollywood using it. We’re looking to expand [our list].

Is this your first entrepreneurial venture?
No, both of us have done multiple things, but this is by far our biggest and most successful venture to date. We had a consulting company together and before that, I spent middle and high school selling [Macintosh computer] apps. I started other apps over the last few years. Giovanni paid his way through college by writing software and selling it online. It’s something we’ve had a history in.

How did you hear about the Minnesota Cup? Why did you join?
I knew about Minnesota Cup before. We had done some consulting work for a company that won the general division a few years ago called KidBlog, so I was aware of it from that. We weren’t sure that we were going to apply or if we were ready or the right sort of company. But I had lunch with Dan Flies from KidBlog and he really encouraged us to do it because even if you don’t advance, it really helps to go through the rigorous process. The questions the judges ask, the forms, the business plans, the presentation – it was all a really good exercise for us because we had spent our time developing our product. We had briefly thought about some of these questions, but it was good to be pushed to think, “Well what actually is the size of the market?” It helped us look to the horizon.

What was the most challenging moment in the competition?
The most challenging thing was when we gave our presentation and we gave them projections of where the company was going and they said to us, “That projection isn’t ambitious enough and there’s so much more potential.” It really threw us for a curve. We were wondering what we missed. They see huge potential and how do we tap into that? How do we grow the company and get there quickly? I expected them to say, “Your projections aren’t really realistic. You aren’t going to get that many sales.”

Have you been approached by new investors since you’ve won?
Definitely. It’s been hugely helpful – just even what I talked about earlier with them pushing us to be bigger opened our eyes and see our business in a whole new light. It’s also opened a lot of doors for us. We’ve been getting great advice and meeting with some people around the Twin Cities that previously would have been unavailable to us. We have people now approach us about investment and we’re seriously considering it. We’re entirely bootstraps, so it’s just the two of us invested at the moment.

What are your thoughts on the Minnesota tech scene?
It’s really been taking off and it’s worked out really well for us to be here. It’s been a really great place to find people to help us with our business. There’s a lot of untapped tech talent here and companies are finally figuring that out. You’re seeing a lot more startups; you’re seeing bigger companies [based elsewhere] looking to make investments and open offices in the area. People are figuring out that you don’t have to be in Silicon Valley to do a startup. It helps to have Giovanni out there, but the entire company doesn’t have to be out there.

What are the differences between the tech scenes in Minnesota and Silicon Valley?
Well, it’s been useful to have a foot in both doors as it allows us to take the best from each. There’s more of a sense of community here in Minnesota – startups are very interested in helping each other out. Everyone wants to see the tech scene thrive; it isn’t a zero-sum game. You don’t get that same sense in the Bay Area. The one advantage that I’ve seen with the Bay Area is that there are more people who have been in a similar business to us. A lot of people we talk to in Minnesota are generalists because there’s such a wide variety of industry, whereas out there it’s based on tech and software. Sometimes it’s great to seek advice from people out there who have been in a similar business. Costs are dramatically lower in Minnesota, though. We’re a profitable company, but it would be hard for us to do that out there. Our growth would be much slower as well. Given the type of business we’re trying to build, Minnesota has been a really great place.

Do you intend on staying in Minnesota as you grow?
Yes. We intend to keep our current setup and hiring both here and elsewhere.

What is the future of Astropad?
We’re hugely excited for the iPad Pro and the Apple Pencil products that were just introduced. They’re the missing piece that we need for our software. It’s going to help a lot. Our long-term plan is to be a replacement and take on Wacom, who is currently the market leader in making graphics tablets. We want artists and students and amateurs and anyone that wants to do digital art to be using Astropad.