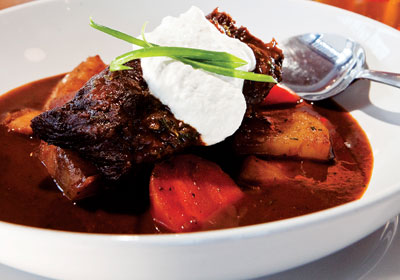 The old standard is no longer just an ironic statement in hipster restaurants.
By Tricia Cornell
February 11, 2012

When Sunstreet Breads in Southwest Minneapolis launched dinner service early this winter, it was only natural that the menu should include pot roast. When you step into the sunny, friendly space filled with comfortable blond wood, much of it milled by baker and co-owner Solveig Tofte’s father, you understand why. This is a welcoming and sincere spot, and pot roast is the most sincere and welcoming dish in the American culinary repertoire.

A few years ago, you could get pot roast at home, at a supper club, and at The Modern in Northeast Minneapolis. And that was pretty much it. The Modern’s pot roast was good—still is—but it was also ironic: retro and domestic and beloved by a population who were neither of those things in their workaday lives. It was a reaction to a dining scene that latched onto new ingredients, techniques, and cuisines.

But, now, pot roast is back—and it’s not a reaction, but a reflection of where we are culinarily. We’re ready for sincere.

At Pig and Fiddle, the bar that brings peasant food to the upper crust at 50th and France, you get your pot roast in a Cornish pasty, wrapped up in an expertly flaky pie crust. There’s just enough of the thickened sauce to hold the filling together and make if flavorful. At Cheeky Monkey Deli in St. Paul’s Cathedral Hill, leftover dinner service pot roast is shredded and layered with pickled onions and horseradish sauce to make a filling sandwich.

These are both good, but Sunstreet’s is the new classic of the genre. The flavor of the braising liquid—red wine, tomato paste, and roast turkey stock with fresh thyme and rosemary—permeates the meat. Chef Nettie ColÃ³n says this is because she removes all of the fat and sinew from the short ribs (yes, short ribs, not your grandma’s brisket) before giving it a good, hard sear.

“The braising juju—that’s what we call it,” she says, “absorbs into the meat.”

A big, meaty rib goes on a deep plate along with plenty of this reduced “juju,” alongside a handful of tender potatoes and parsnips. A touch of horseradish sauce with just enough bite, and it’s done. This is short rib pot roast at its best: good, classic, sincere, and just what we need right now.