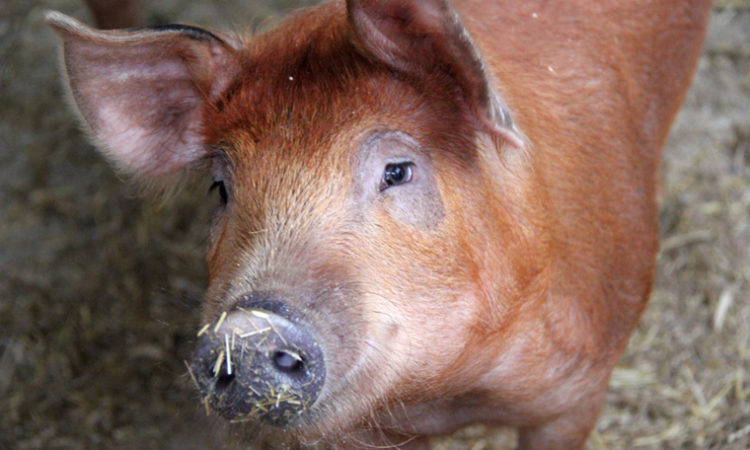 The falling price of pork is worrisome for pig farmers in Minnesota, one of the biggest swine-producing states in the U.S.

Pork Prices are Shrinking Amid the Trade War, Causing Concern Among Minnesota Farmers

Minnesota is the third-largest pork-producing state in the U.S.
By Greta Kaul
August 02, 2018

Greg Boerboom has been watching the price of pork on commodities markets with a more-than-usual amount of trepidation of late.

In the span of last week, the sale price the second generation Marshall, Minnesota family farmer can get for a pig dropped by about $12.

That’s just the latest decrease. In recent months, the $165 sale price Boerboom was getting for a pig has dropped to the $145 range, thanks in part to new tariffs China and Mexico have placed on pork products, in retaliation for U.S. tariffs on products like steel and aluminum.

The falling price of pork is worrisome for pig farmers in Minnesota, one of the biggest swine-producing states in the U.S. And things are not looking up: Futures, prices predictions about where prices will go in the coming months, suggest a drop to around $120 per head by December, Boerboom said.

The U.S. pork industry had been experiencing some fat years recently, with production ramping up. Pork producers had it good. Different markets have developed tastes for different cuts of meat: China takes pork belly and picnic (the lower shoulder), and Mexico takes the hams, Boerboom said. In the U.S., people are big eaters of pork shoulder and bacon, which comes from the belly.

“Every country and everybody wants something different when you break the pig down,” he said.

Then came the tariffs, a response to President Donald Trump’s efforts to bolster homegrown industries. Last month, Mexico increased tariffs on U.S. pork imports to 20 percent, while Chinese taxes on pork imports from the U.S., increased in July, are now more than 70 percent.

“The last few years (have) been great. We’ve had some real good years, real profitable years and productive years,” Boerboom said. “Right now, they’re tough. The market has dropped dramatically in the last month or so.”

The price of lean hog dropped about a third since early July, according to data from Business Insider. About 30 percent, or $717 million, of Minnesota pork was exported abroad in 2016, the most recent year of data available, according to the Minnesota Department of Agriculture.

The U.S. Department of Agriculture is reporting higher volumes of some pork products, including pork belly and trimmings stockpiled in cold storage facilities. Pork industry watchers fear stockpiles will increase due to falling foreign demand.

Boerboom says his farm hasn’t adjusted the number of pigs it produces in response to the tariffs, but his family has dropped the weight of pigs ready for sale by about 15 pounds to save money on feed and ultimately send less meat to market. When pigs are close to maturation, they can eat up to 90 cents’ worth of food per day, Boerboom said, cutting into profits.

Pork represents the most direct hit to Minnesota meat producers due to trade disputes so far, but others in the state’s ag industry have been hit, too.

Trade disputes have also affected prices for corn and soybeans, Minnesota’s two biggest agricultural exports, and tariffs on dairy from China and Mexico are now in effect, too. 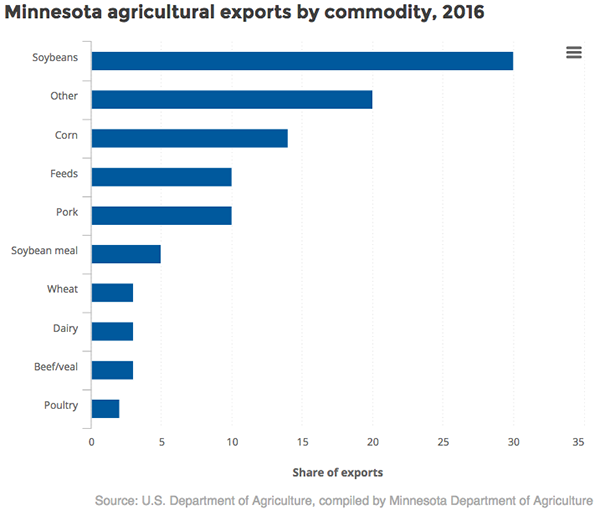 Turkey, another big Minnesota industry, hasn’t been hit with any new tariffs. U.S. poultry has been banned from China since the 2015 avian flu outbreak, so China is less of a concern for that industry at the moment.

Turkey producers are, however, paying attention to North American Free Trade Agreement negotiations in the hopes that Mexico continues to be a major destination for Minnesota turkey. Of the 90 percent of Minnesota turkey sold out-of-state, about 15 percent goes abroad — much of it to Mexico — according to the Minnesota Turkey Growers Association.

“Our turkey farmers are watching the trade news closely and we have been in contact with our leaders in Washington, D.C. to make sure they understand how important trade is to us,” the Minnesota Turkey Growers Association said in a statement to MinnPost.

Despite new tariffs from Canada and China, the Minnesota Beef Council says beef has not seen the same effects soybeans and pork have.

Last month, the Trump administration announced $12 billion in agriculture aid aimed at stabilizing some of the industries affected by foreign tariffs, such as soybean, corn and pork farmers. But Boerboom is concerned the bailout won’t really help pig farmers.

“They’ve announced the big agriculture package, but pork production has never had any government subsidies or government floor,” he said. “Corn, soybeans, milk — they’ve had some government program … they have no idea where the pork producers are because we’ve never had a program.”

These types of tariffs are painful for farmers, but, says Marin Bozic, a professor in the applied economics department at the University of Minnesota, the long-term concern is that the U.S.’s trade competitors are loosening trade restrictions, while the U.S. tightens them.

“Our competitors are signing free trade agreements left and right: New Zealand, Australia, the European Union. All of them have in the past few years entered into new kinds of multilateral as well as bilateral trade agreements with our major markets,” Bozic said. “That may not be the story of the day, because tariff retaliations and trade wars (steal) the limelight, but longer-term, without comprehensive market access that matches or exceeds what our competitors enjoy, we will struggle.”