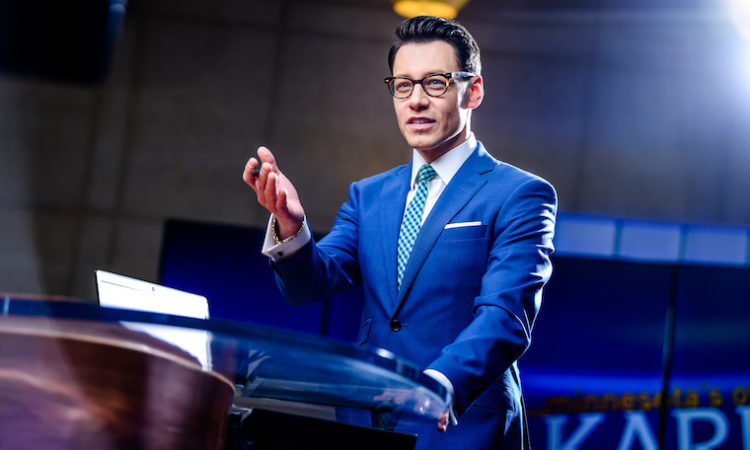 Cory Hepola from his TV days at KARE-11.

The ex-WCCO Radio host is considering a run for Governor.
By Adam Platt
February 16, 2022

More than three years ago, Cory Hepola left KARE-11 and took over mid-mornings at WCCO Radio with an eye toward doing something different for the Good Neighbor. He was the first visible salvo in station efforts to bring a more youthful edge to its programming and create some visibility with a younger cohort of listeners.

Hepola, who turns 40 this year, left WCCO in the middle of last week, after station management heard a snippet of a conversation tweeted by Minnesota Public Radio reporter Brian Bakst, where Hepola indicated that he was mulling a run for governor. Bakst said that he came upon a document that caused him to contact Hepola.

WCCO or its parent company, Philadelphia-based Audacy, apparently was concerned about the appearance of Hepola using the daily three-hour air shift to seed a political campaign. Neither Hepola nor station management would discuss the end of his tenure (Hepola is probably bound by a non-disclosure agreement, based on current corporate practices.), but there is perhaps more to it than the gubernatorial trial balloon.

It’s well known within the local radio biz that many of the legacy air talent contracts at WCCO were in renewal windows and the station has new leadership. (TCB wrote about ‘CCO and its challenges just under a year ago.) Observers have expected a number of changes at the station, once it hired a morning drive personality to replace retired Dave Lee, following an exhaustive search. Vineeta Sawkar took over morning drive in January.

After AM drive, sources in local radio tell TCB that WCCO’s ratings drop 40 percent and are relatively constant throughout the rest of its program day. In the coveted 25-54 age demographic, the all-day ratings are 35 percent of AM drive. In 2021, “It’s Cory Hepola” did not substantially differ from that trajectory. But the game in radio is revenue, and WCCO is an outlier, in that ratings weakness doesn’t necessarily translate to revenue weakness.

Hepola’s show was a mix of news, sports (a particular strength of the former TV sportscaster), and a folksy self-help/life coach vibe. Hepola had long indicated he had no interest in using his airtime for the typical talk radio mix of angry callers and divisiveness (which is not really CCO’s stock-in-trade anyway). Whether it moved the needle is anybody’s guess.

Observers in the local radio business say if Hepola’s show was highly lucrative or believed to be integral by station management, he would not have been let go. As one competitor noted, “If you feel you’re building your future around a talent, you take him off air while he’s making his political decision and if it’s a no-go, you put him back on.”

Hepola’s stature extends beyond WCCO. In 2021, the Perham native co-produced (with Otter Tail County) and hosted a docuseries, Rural By Choice, regarding stereotypes of the rural Midwest. Though created to promote Otter Tail as a place to live and work, it isn’t a bad vehicle for someone planning a run for statewide office. A second season is in production.