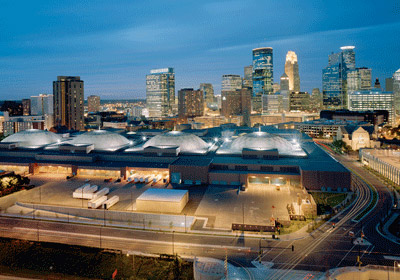 The 40th annual, four-day convention is expected to generate about $9 million in revenue and attract up to 5,000 attendees from around the country.
August 29, 2014

Thousands of state legislators, government officials, business representatives and others from around the country entrenched in public policy are converging in the Twin Cities this week for the National Conference of State Legislatures’ 40th annual summit.

The bipartisan research and policy group’s summit began its four-day run Tuesday at the Minneapolis Convention Center. Up to 5,000 attendees are expected to take in more than 100 policy sessions. Topics include the sharing economy, municipal bankruptcy, 3D printing and a session called “From Minnesota to Mumbai: Economic Competitiveness and Immigration.”

Retired General Wesley Clark, the cellist Yo-Yo Ma, political authors John Heilemann and Mark Halperin, and Cindy McCain will be among the diverse range of speakers featured. McCain, a philanthropist and wife of U.S. Sen. John McCain, will join U.S. Sen. Amy Klobuchar, D-Minnesota, for a Wednesday presentation on efforts to raise awareness of human trafficking.

Minnesota Senate President Sandy Pappas, DFL-St. Paul, told the Pioneer Press that state leaders began working early last year to bring the convention to the Twin Cities and sold the idea during the 2013 summit in Atlanta. She told the newspaper that lawmakers hired a fundraiser to raise about $1.5 million in private contributions to cover the costs of hosting the event, which is reportedly expected to generate about $9 million in revenue for area hotels and businesses.

Throughout the week, attendees and their families will also be able to tour local businesses like the Mayo Clinic and Xcel Energy in addition to stops at the Mall of America and Minnesota State Fair.  Multiple Minnesota businesses will be among the many exhibitors that will have a presence at the convention, including Target, General Mills and U.S. Bank. A full list of exhibitors and booths can be found here.

An NCSL spokesman, meanwhile, told the Pioneer Press that the organization was impressed by Minneapolis’ airport and transportation infrastructure, its convention center and the area’s hospitality.

Select events will be live-streamed throughout the week at ncsl.org. The NCSL also created a mobile app for the event.