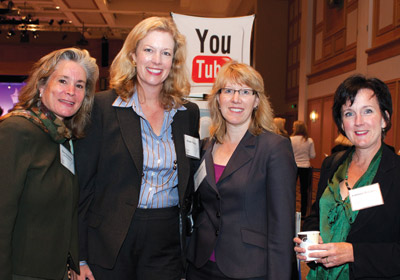 The best opportunities for networking this month.
October 23, 2012

Juvenile Diabetes Research Foundation’s Imagination Ball In a season full of galas, this is one that attracts a strong business contingency. “[It’s] an amazing list of who’s who in business, and [they have] great passion about their cause,” says Patrick Milan, executive vice president and chief creative officer for Tunheim Partners. Northern Tool’s Wade Kotula and wife Sue are co-chairing this year’s event, which includes a cocktail hour, dinner, auctions, and dancing.

MIMA Annual Summit In its relatively young field, the Minnesota Interactive Marketing Association has become an old pro—and its annual summit, now in its 11th year, has become the Midwest’s largest yearly marketing and technology conference. The fun and informative event attracts 1,000 attendees, with a range of workshops and breakout sessions led by digerati from near and far, plus keynote speeches this year by former Apple chief evangelist Guy Kawasaki and game designer Jane McGonigal. When the learning is done for the day, the networking will continue well into happy hour.

Minnesota Business Partnership Annual Dinner This one’s invite-only, but if you can get in, you’ll be in great company. The Minnesota Business Partnership counts more than 100 chief executives as members, and its annual dinner gathers nearly 800 business, political, and community leaders. Peg Birk, president and CEO of Interim Solutions, considers it one of the best business networking events of the fall. “If your employer is not a member, find a friend who is a lobbyist and I will bet they can squeeze you in at their table,” says Birk. “The reception is a great time to [meet] people, and the top 100 CEOs are there and generally very friendly.”

Minnesota Venture & Finance Conference Interested in entrepreneurship and venture capital? This daylong conference “Gets to [the] pulse of what’s happening in the entrepreneurship and innovation community,” says Brad Lehrman, attorney at Soffer Charbonnet Law Group. Now in its 26th year, the event offers ample opportunities to learn, with high-level panels, presentations by up-and-coming companies, and keynote speakers—including Proto Labs CEO Brad Cleveland—as well as opportunities to network with 400-plus entrepreneurs, investors, CEOs, and executives.

WomenVenture Fall Event WomenVenture’s annual luncheon has a fantastic turnout every year, with some 1,200 businesswomen, entrepreneurs, and others who support the nonprofit’s mission to help women achieve economic success. Longtime local businesswoman Linda Donaldson will be honored at this year’s event, which will also feature keynote speaker and Minnesota native Thia Breen, EstÃ©e Lauder’s president for North America. Show up early to browse the marketplace featuring products from local women-owned businesses.

Minnesota Orchestra Opening Concerts With a powerhouse conductor and a powerful sampling of local businesses on its board and donor roll, the Minnesota Orchestra’s season-opening performances are a good place to see and be seen. Of course, the scene itself will be different this year, with the Convention Center’s auditorium standing in for Orchestra Hall during its $50 million renovation. Osmo VÃ¤nskÃ¤ conducts the concerts, which feature piano virtuoso Garrick Ohlsson playing Rachmaninoff’s Piano Concerto No. 3, as well as performances of Elgar’s Enigma Variations and Respighi’s Fountains of Rome. For the full opening-night effect, buy tickets for the evening shows.

Children’s Hospital Association’s Storyland Ball Sixty-three years and going strong, the Children’s Hospital Association’s Storyland Ball has had plenty of time to build a loyal following, and the 700-plus attendees hail from a variety of Twin Cities circles. “I have noticed a lot of people from the medical professions and administration, combined with community leaders, business professionals, those who are supporters of health care, and parents,” says Jean Delaney Nelson, senior vice president and chief information officer at Securian Financial Group. Whitebox Advisors COO Jonathan Wood and his wife are honorary co-chairs, and celebrity auctioneer Karen Sorbo will lead a live auction.