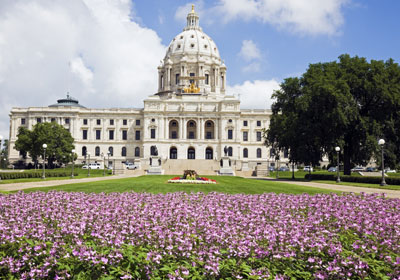 Lawmakers in Minnesota, currently home to one of the country’s lowest minimum wages, have reached a deal to hike the minimum hourly pay to $9.50 over the next few years.
April 17, 2014

The Minnesota House and Senate announced Monday that an agreement was reached to raise the state’s minimum wage to $9.50 per hour by 2016, with additional increases down the road based on inflation.

Minnesota’s current minimum wage is $6.15 per hour and hasn’t been increased since 2005, although many employees qualify for the federal minimum of $7.15.

According to the Star Tribune, most large businesses will have to pay the new minimum by 2016, although smaller businesses—those that generate less than $500,000 in annual revenue—will be able to pay their workers $7.75.

“I congratulate the House and Senate leaders for reaching agreement on minimum wage legislation,” Governor Mark Dayton said in a statement. “I am very pleased that it will raise Minnesota's minimum wage to $9.50 per hour, and index it to inflation. I look forward to signing this legislation into law.”

Before Dayton can sign the bill into law it first has to move through both chambers of the House and pass a Senate vote, which is reportedly scheduled for Wednesday.

If the deal becomes law, the increase will reportedly occur over the next several years, with the first jump to $8 an hour coming in August. The Star Tribune said the deal will also allow the minimum wage to increase by at most 2.5 percent each year after 2018—to keep in line with inflation. After a few years, the hike would bring Minnesota’s minimum wage from among the lowest in the country to among the highest.

A few businesses had thrown their support behind the minimum wage hike prior to the mandate. Local pizza chain Punch Pizza even received a shout-out in President Obama’s State of the Union address in January for raising the minimum wage of its entry-level employees to $10 an hour.

Both Minneapolis Mayor Betsy Hodges and St. Paul Mayor Chris Coleman also supported the wage hike with a rally at the capitol in February.

Conversely, Senator Dave Thompson and Representative Kurt Zellers—two Republicans running for governor—said that if they displace Dayton in the next election they would repeal the wage increase, according to the Star Tribune.

The Minnesota Chamber of Commerce also opposes the bill, preferring a more modest increase to the federal standard of $7.25. And the Hospitality Minnesota coalition—which is a trade group that includes local restaurant, resort, and hotel owners—also resisted an increase to $9.50 an hour, sending about 270 members to the Capitol for a rally in March.