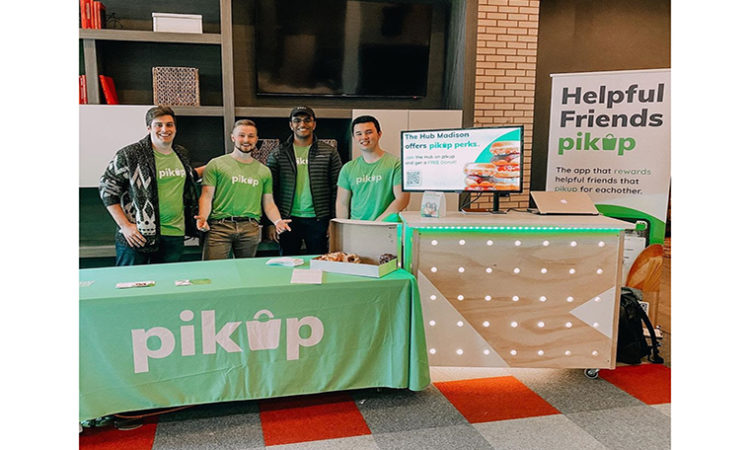 The Pikup app was originally geared toward college students. Now, it’s being used to help cut down on grocery store trips.
By Kait Ecker
April 07, 2020

The Pikup app wasn’t intended for use in a pandemic when it first debuted in 2019. The main goal, says co-founder Bharat Pulgam, was to make life easier for college students. Users log on to the app while running errands, and their friends can ping them with requests along the way. For example, you could use the app to ask a friend to pick up a muffin while they run to the coffee shop.

But now, as the Covid-19 pandemic tightens its grip on communities across the country, Pikup is quickly transitioning to help neighbors in need. After Pulgam posted about his app in Nextdoor in Wayzata, he quickly got about 40 of his neighbors on board.

“It could help people avoid having to go out. We could organize errands together. We could promote social distancing and remove some of the clutter from grocery stores,” he said.

Since the middle of March, Pulgam has added a group authentication system and approximately 35 neighborhoods from Minnesota to California.

“We’ve seen really great use of it as hundreds of people per neighborhood are requesting help and are doing pick ups themselves,” he said. “We lost some momentum, but we’re now regaining some momentum, and it’s exciting to see that keep happening.”

Growing each day, the app partners with merchants to provide ease of use and perks like gift cards or free items to users. And the app works both ways––everyone can help and ask for help.

“There’s a lot of people who have created groups and have created opportunities to help people that need it,” Pulgam said. “So, in a unique way, we’re not just building the neighborhood but we’re activating neighbors who maybe before didn’t know each other.”

He sees the community being built now as people help each other in the midst of a crisis lasting for years to come.

When Pikup first launched, the app quickly gained traction on campuses in Wisconsin and Minnesota. Its four founders had dropped out of Carlson College at the U of M to develop the concept when they were accepted into the Techstars Target accelerator program, Pulgam said. By the end of 2019, the team rebranded the app from Runerra to Pikup to reflect the way people were using the tool.

But then the pandemic struck and closed college campuses across the country. Pikup began to lose some partnerships.

“A lot of traction and momentum we had vanished within a week,” Pulgam said. “It’s not an exaggeration to say the entire thing changed overnight when we got the notice that school was closing.”

Still, Pulgam is optimistic about the future of the app.

“Everyone needs help, and everyone could use a pick-me-up every now and then,” he said. “The need for eggs and milk is never going to go away. So, we hope that this will not only grow over the course of this period in our lives where everyone does care about everyone else, everyone does help each other, but we hope that afterwards it’ll stick.”