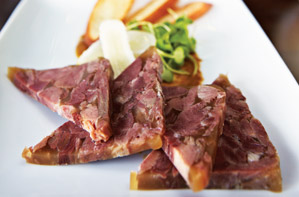 Heartland and others tuck into the charcuterie trend.
By Peter Lilienthal
October 11, 2010

More menus start now with a plate of cured and processed meats—salamis, pÃ¢tÃ©s, pancetta; mostly pork—known as charcuterie. The trend is an outgrowth of the “head to tail” movement, a challenge to chefs not to waste a precious bit of tongue, tail, trotters, offal, or snout.

One who takes it on admirably is James Beard nominee Lenny Russo, whose newly relocated and expanded Heartland Restaurant in St. Paul’s Lowertown now boasts a dedicated charcuterie kitchen. Russo’s daily-changing menu always includes cold-meat specialties—his headcheese is exemplary. And this fall, he says, “we expect to be selling a selection of house-cured meats in our new retail market adjacent to the restaurant.”

Other local standouts include Michael MacKay, who features a changing line-up of house-cured bacons, pÃ¢tÃ©s, and fabulous sausages of the day at his Citizen CafÃ© in south Minneapolis, and Filippo Caffari, the former I Nonni head chef and master butcher. His meats flavor the delicious pasta dishes at his northeast Minneapolis trattoria, the Butcher Block.

However, few in the country are better at converting sows’ ears to silky goodness than Mike Phillips, former head chef at Craftsman, who announced a new partnership in August with restaurateur Kieran Folliard (the Local, the Liffey, the Cooper, and others). Their artisinal charcuterie company called Green Ox Food will supply restaurants and retailers. Iowa native Phillips, a self-taught charcutier, has long cultivated an appreciation of porcine goodness, but he says a turning point came when he learned that the highly regarded California charcuterie line of Paul Bertolli uses pork raised in Iowa and Minnesota.

“We’ve lost our sense of regional pride, and I’m determined to produce premier dry-cured meats made right here in the Upper Midwest,” Phillips says. One of his favorites is coppa, a cold cut made from a muscle right behind the pig’s head. It can be cured in a quarter of the time of a traditional prosciutto, and Phillips describes it as “buttery and with a flavor profile that is smooth but with just a bit of bite.”

Reason enough to seek out Green Ox provisions when they begin to show up on Foillard’s menus and others this autumn and winter.