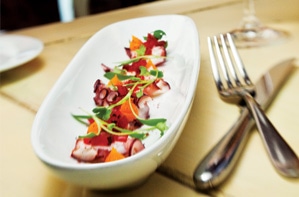 “I’ve probably sold more octopus in the past year than I have in the previous 20 combined,” says Tim Lauer, general manager of Coastal Seafoods. Tako has always been on the menu at sushi bars, and cephalopods are served up regularly at Christos, It’s Greek to Me, and other Mediterranean spots. But just why their tentacles are reaching into so many chefs’ imaginations now is a bit of a mystery.

At the new Ringo in St. Louis Park, octopus is pan seared and served with vegetables and soba noodles in a spicy chili sauce. At the Filipino-themed Subo in downtown Minneapolis, the seared meat marries with ginger, garlic, scallion, and kalamansi, a small lime-like Asian fruit. Sea Change at the Guthrie has made a signature of its small plate of incredible slow-cooked then char-grilled tentacles paired with salsa verde and Spanish peppers.

None of these dishes is a bargain to serve. Most preparations involve removing heads, innards, and beaks; the result is a 50 to 60 percent yield on an ingredient that costs about $4 a pound. To get the meat tender requires a labor-intensive process of boiling and skinning. Consider, too, that many diners are squeamish about ordering the end result.

Why put it on the menu? “It’s unique, versatile, and delicious,” says Chef Doug Flicker at Piccolo. He’s also found a shortcut: Flicker buys his octopus precooked from Japan, then plates the sliced tentacles almost like charcuterie, with Swiss chard refrigerator pickles, a bit of cilantro, and espelette peppers, a spicy Basque variety.