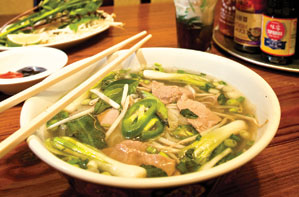 Pho Is a Winter Tonic

On a raw, blustery day, few things cure what ails me like a steaming hot bowl of the traditional Vietnamese soup called pho (pronounced with an abrupt, short u sound, like “fah”). Nothing more than broth, protein, noodles, and garnishes, it nonetheless delivers a wallop on all sensory fronts.

Aficionados are prone to endless debate over best-in-town honors, as pho has become ubiquitous at local Asian restaurants. Top contenders include Ngon Vietnamese Bistro, Pho Ca Dao, Pho Tau Bay, and my own personal favorite, the Pho 79 location on Nicollet in Minneapolis.

The heart and soul of pho is the broth. Traditionally made from beef bones and oxtails, a great stock needs to simmer for hours, and flavor is predominantly a function of the bones used, their marrow content, and, according to a Vietnamese colleague, a judicious use of MSG. Some places offer a chicken broth alternative. Star anise, scallions, and chilies are other common ingredients. Beef is the standard protein—though versions are made with chicken, tofu, and shrimp—and thin rice noodles are typical.

From there on out, pho is what you make it. An order includes a supplemental platter heaped with fresh bean sprouts, basil leaves, quartered limes, sliced jalapeno peppers, and cilantro, and set out on the table are sauces: soy, fermented fish, hoi sin, and fiery sriracha. The idea is to add whatever you like to create your own sweet, tart, spicy, savory masterpiece. 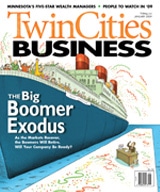 Corner Office-Leading in Crisis
CYA: TARP
The Neglected Demand Side
Editor's Note-The Best in Town
See all stories by this author >