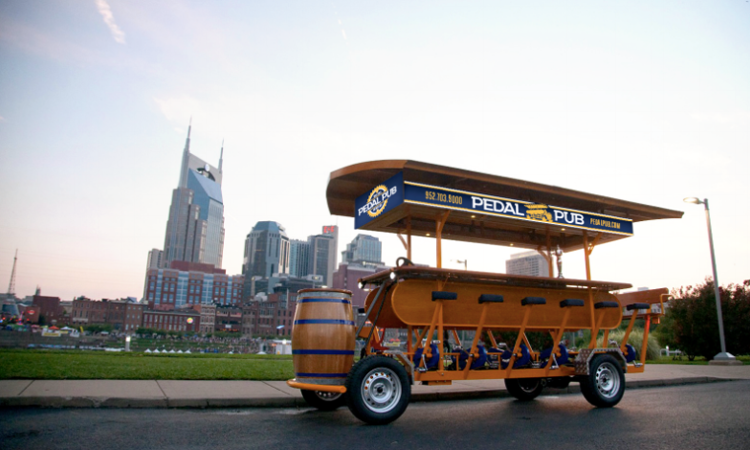 Minneapolis-based PedalPub LLC, which is the authorized distributor for the party bike concept in the U.S., Canada, Mexico and the Caribbean, wants to open several new locations this year.
By Sam Schaust
June 12, 2018

Pedal Pub, the biking and boozing hybrid that lets groups traverse city streets on a Dutch-made bike, is looking to entice prospective franchisors to license the concept in cities elsewhere in the United States and Canada.

Minneapolis-based company PedalPub LLC, which imports its party bikes from Amsterdam—the birthplace of the original “Bike with the Barrel”—announced on Monday its campaign to open several new locations by the end of the year. Through outreach efforts, the company has set a goal to have 1,200 bikes in operation by 2023.

Outside of its Twin Cities operations, Pedal Pub has 44 licensed locations open in 18 states, including several in Michigan, California, Florida, Texas and even one in Hawaii. These licensed locations, however, don’t typically run under the Pedal Pub banner and instead invent their own name. Variations include the Sip-n-Cycle, The Handle Bar, Pedal Wagon and Brew Choo.

Included in the start-up cost for a Pedal Pub franchise is the purchase or lease of two Pedal Pub bikes, which accommodate up to 16 people, as well as the capital needed to insure and store the bikes. Marketing and corporate support costs are also factored in.

“We have partnered with respected bike manufacturer, Fietscafe, to ensure every bike is of the highest quality and safety,” said Pedal Pub chief development officer Shane M. Dunn in a statement. “Our operators work to create meaningful relationships with local restaurant and bar owners to ensure every tour has exciting destinations while giving franchisees opportunity to network with other entrepreneurs in their communities.”

While Pedal Pub offers pre-determined tours typically lasting two hours, it also allows groups to map their own route. Private tours for customers range between $385 and $440, while individual seats during mixer tours cost $39.