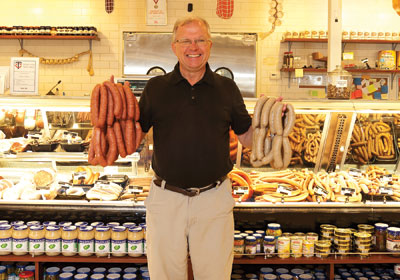 Business is good for Kramarczuk’s, thanks to three summers of exposure at Target Field.
August 01, 2012

Strolling through the concourses at Target Field between innings this season, Twins fans may have been enticed by the pungent smells of fresh sauerkraut, grilled onions, or a crisp bratwurst on the grill.

The company responsible for those smells is longtime Minneapolis deli and sausage maker Kramarczuk’s, and the wildly popular booths at Target Field peddling its sausages have had a dramatic effect on its overall business.

“On opening day [2010] we had two stands with two lines coming into each one, and each was going about 50 deep,” says Pete Spike, Delaware North’s Target Field general manager. “I stood in awe as people kept lining up, and we only had a little three-foot grill to cook these sausages on.”

According to Spike, about one out of every 17 fans buys a bratwurst or Polish sausage from a Kramarczuk’s stand, and though the 2,000-plus sausages sold each day represent a heap of revenue to Kramarczuk, they’re low-margin sales.

“When we sell our product to Target Field we give them a price where we could make a decent margin, but by no means do we make a killing,” says Kramarczuk. “It’s mostly just exposure.”

And it’s that exposure that Kramarczuk says has driven up walk-in business so much for his deli. But for those who wonder how hipster fame has changed the century-old business, he offers an assurance: “We’ve got a very good business, we’re very happy. We’re doing well and we’re not going to sell out.

“We’re proud of our product, our tradition, and our heritage. That’s our entire reputation in a nutshell.”