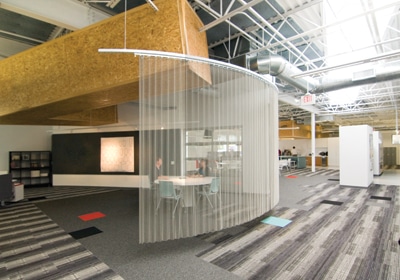 Three companies, three buildouts, one question: What do your employees need?
December 01, 2012

Project: New headquarters for Outsell, LLC
Location: Leased space in Capella Tower, downtown Minneapolis
Designers/Architects: Gensler
Completed: August 2012
Approach: The talent is at the center of it all

Cool! Where do you work?”

That’s one of the payoffs that CEO Mike Wethington wanted when he set up new headquarters for his company, Outsell, LLC. Photos from the open house celebrating Outsell’s move made their way to employees’ Facebook pages, and friends wanted to know if the company had job openings.

The answer is yes. Outsell is on Inc.’s 2012 list of the fastest-growing companies in the United States. Revenue is up more than 400 percent over the past three years, and the staff has nearly tripled to 80 people during roughly the same time frame. New space was a necessity.

The buildout, designed by the Minneapolis office of global architecture firm Gensler, has been a nice piece of marketing for Outsell, whose own business is marketing. Outsell designs and sells interactive software-as-a-service that automotive companies and their dealerships use to connect with customers.

“On the business side, the spend [for the new space] pays for itself in recruiting, retention, and collaboration,” Wethington says.

A lot of Gensler’s clients “want to do something to really wow their clients,” says Bill Lyons, managing director for Gensler Minneapolis. “Outsell had a different approach. They really wanted to wow their employees and give them a great work environment.” Not just at their work stations, Lyons adds, but by making the entire office a tool for fluid creativity.

Just off the elevators, where a panorama of windows shows off the view from the 32nd floor, there’s a wide-open pantry and dining area with one big family-style table. “We gave the best space to employees,” Wethington says, instead of using it for the usual reception area, conference room, or suite of executive offices.

In fact there are no private, enclosed offices anywhere, not even for the CEO. Most of the floor plan is open, common space divided informally by furniture groupings, partial enclosures, custom metal-mesh curtains that can be drawn aside, or the interior walls of the building’s core.

Beyond an egalitarian feel, what Outsell wanted for its people was one of the tech-friendliest spaces around. So whether they’re working in a loungey grouping of sofas and chairs, at a standing-height counter made for quick meetings, in a conference room, or at one of eight “walk stations” that have built-in treadmills, connectivity is easy. With help from supplier Bartlett AVS, Bryan Harwood, Outsell’s chief information officer, made data, teleconferencing, and presentation technology consistent throughout the office and easy to use from any device, including an employee’s smartphone.

“Any device anywhere can be pulled into the system,” Harwood says. That means anyone at Outsell can run a spontaneous conference call and share files or make a presentation using their own laptop or phone. It’s even possible if they come to the conversation empty-handed. Harwood put an iPad or iPod Touch in every meeting space. In place of the typical codec boxes that many companies buy for teleconferencing at $15,000 to $18,000 a pop, he and Bartlett built a videoconferencing system at a fraction of that cost with Mac Minis and a web-based open platform.

Tech isn’t everything. A lot of conversation at Outsell includes illustrating ideas by sketching them. “People use whiteboarding a lot, and we architecturalized those moments in special ways,” says Gensler Senior Associate Betsy Vohs. Many walls are covered in erasable whiteboard paint, and the low panels that separate people’s work stations are a coated glass that works both as a whiteboard and a magnetic bulletin board. The glass was a custom solution devised by Target Commercial Interiors and Steelcase.

“The easy thing is to put screens everywhere” when a company wants to signal its sophisticated use of technology, says Gensler’s Lyons. But some of the design elements that Gensler and Outsell love best are so low-tech they don’t even require an electrical outlet. One is a wall where small icons that represent smoke signals, semaphore, Morse code, satellite dishes, and instant messaging spell out the word “transform.”

New, But Not Too

AgriBank’s old headquarters were a little like farming used to be a couple generations back: divided into small acreages.

The phrase “siloed operations” had real resonance, and not just because AgriBank lends to farmers through a network of 17 associations in the Farm Credit System. The headquarters staff of 180 people were scattered over multiple floors of two St. Paul office buildings, across the alley from each other and connected only by public skyways. “It used to be that we would have to rent a space for any group over 20” that wanted to hold a meeting, says Pat Jones, vice president of human resources and administration. “We had to be very planful.”

They were oddly make-do quarters for a bank that has more than $75 billion in assets. AgriBank covers one of the largest Farm Credit System districts in the United States, including 40 percent of the country’s farmland.

“We wanted to have a world-class space that was indicative of our strength and our mission to the farmers,” Jones says. So it was high time, after 30-some years, to plant AgriBank someplace new. But not too new.

“It was a very important goal for the leadership to have a space that was forward thinking, but not forgetting about the history of the company,” says Debra Barnes, who led the Agri-Bank project as director of interior design for the Minneapolis headquarters of HGA Architects. “What’s interesting about AgriBank is that even though they have an IT function and they have a financial function, they’re not like a Silicon Valley IT company.

“They recruit seasoned professionals,” she continues. “They don’t have a big millennial influence in their demographic for recruiting and they have a lot of tenured employees, so that really impacted their goals for the space.”

AgriBank made small steps toward a more open floor plan. Pockets of collaborative workspace were built in, but there are still plenty of private offices, and much of the remaining floor plan is devoted to work stations, Barnes says. At the same time, “they really wanted transparency, they wanted some of that cross-pollination of their departments.” So the panel height on work stations was lowered. “When people are walking around, you can see them,” she says.

A large meeting room in the first-floor atrium of the Wells Fargo Building creates more visibility, too, Jones says: “Our CEO gets in front of the managers more, so his message gets across more.” The room seats 200, was designed with an adjoining kitchen and reception area, and had already hosted more than 180 meetings and events less than a year after AgriBank took up the lease.

But one of the most valued meeting spots isn’t a room at all, it’s a staircase. AgriBank is still spread over several floors of leased space: the meeting room and a small group of employees on the first floor; the IT staff and a semi-independent business unit on the seventh; and most of AgriBank’s people on the 14th, 15th, and 16th floors of the Wells Fargo tower. Connecting those three contiguous floors is a wide, welcoming internal stairway.

“On each floor, it goes to the kitchen area,” Jones says, “and then on 15 is the larger break room area. So everybody uses those stairs. Nobody in between these floors uses the elevator at all.”

“They’re large enough,” she adds, “so that if you’re going down and you meet somebody, you can just step over to the side and have a conversation on the stairs.”

The Politics of Reunification

“This building was a giant darkroom,” says James Eastman, former group managing director for Schawk, Inc., in Minneapolis. And that was fine when Schawk was a different sort of business.

The company, based in Illinois, designs packaging for consumer products. Clients include major brands in food and beverages, pharmaceuticals, and cosmetics, as well as Minnesota-based giants General Mills, Hormel, and 3M.

But while Schawk’s work used to be a manufacturing process, tied to plates of film and darkroom processing, clients have asked Schawk to do more of the creative front-end work of branding and design lately. Schawk, Inc., is now a global umbrella for nine separate companies that manage digital imaging, package prototyping, creation of in-store displays, and more.

In the Twin Cities, Schawk found itself with the “darkroom” it owned in northeast Minneapolis and a leased space in Roseville that reflected Schawk’s evolution as a digital agency. Two facilities (both filled with outdated equipment), two entirely different cultures, and very little staff crossover. Two years ago, Schawk decided to bring them together in one improved facility.

“Sometimes the easy part of a project seems to be designing and building and moving into a facility,” says Joe Hamilton, CEO at 20 Below Studio in Minneapolis, who led the remake of Schawk’s Minneapolis building, stripping it down to the skeleton. “The thing that can be tough is dealing with what we call the change management side of it.” Schawk was a textbook example of how to avoid political pitfalls, getting a handle on each group’s worries about what they’d lose in the transition, acknowledging those concerns, and emphasizing the positives that everyone would gain through the change, Hamilton says. It went a long way toward smoothing the transition.

So did giving people choices. Those used to standing, as they had on the plant floor, got work stations designed to let them stand; others got conventional stations they could sit at.

Lighting was an area where employees had common ground. Given their light- and color-sensitive work and the time they spend looking at computer screens, no one wanted lights that would create hot spots or glare. The building didn’t have many windows and 20 Below didn’t add many either, but it did put in a series of long, narrow skylights.

They “provide light, but provide it in a very ambient and diffusive kind of way,” Hamilton says. “Any direct- indirect lighting that we put in was tied to photocells and dimmers, so that they had quite a bit of adjustability to push it up or bring it back.”

There was still the uncomfortable reality of tight space to confront. Schawk had considered building a new facility. By staying in the existing Minneapolis building, “we were under the square footage of our program [space requirements] by quite a bit,” Hamilton says. “We had to figure out ways to be flexible . . . . Every space has more than one use to it.” Sliding steel-mesh curtains, a transparent glass garage door, and other sliding doors and walls create “rooms” that can be closed off or opened up as larger space when needed.

“The really important part that made this project work was their furniture solution, in that it’s eminently flexible,” Hamilton says. Made by Haworth and installed by Minneapolis-based Fluid Interiors, “it’s based on a small number of components that they can change themselves,” he says. If a creative group dedicated to a particular client or brand “is expanding or contracting, they can have the workspace changed to articulate that and do it in a way that doesn’t involve expensive things, like moving walls or electric or cabling.”

With less “me” space and more “we” space, and a constantly shifting office-scape, there’s no room left for territoriality or old identities. The employees have “embraced the space itself and the flexibility that was built into the space,” Hamilton says. Eastman says the new surroundings are a source of pride when clients visit, but also for Schawk employees on a day-to-day basis. This is “an environment that says something about how they are.”