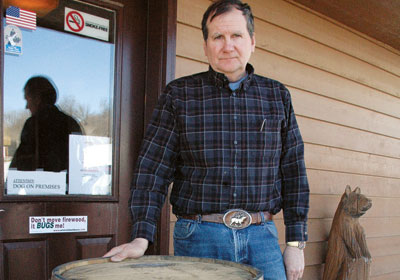 Oaky, But Not Too

Terroir is the alchemy of climate, elevation, soil type, rainfall— the je ne sais quoi that turns grapes into wine with a particular taste and character. Add to the transmutation another element: Minnesota oak.

Staggemeyer Stave Company in Caledonia sits in the heart of a slow-growing, northern white oak forest.For some barrel makers and their vintner-customers, oak from Staggemeyer is now a preferred material.

Its virtues come from the oak’s own terroir. It grows on the same latitudinal parallel as Bordeaux. French oak has traditionally been paramount in winemaking, because the fine wood grain results in subtler flavors. Hungarian oak is sometimes substituted for French; it has a similar profile yet costs only 60 to 75 percent of the $1,200 price of a French barrel. Wide-grained American oak from the Ozarks or Appalachia is the least preferred by many winemakers. It “goes well with some shirazes, but tends to be too loud for delicate wines,” says Peter Beckingham of Beckingham Wines in Australia.

By contrast, Minnesota’s cold climate produces a white oak with an extremely tight grain that’s sold at typical American oak prices of $275 to $400 a barrel. Dave Ready, Jr., Minnesota native and master winemaker of Murphy-Goode winery in Sonoma County, California, has used it for more than 10 years. Staggemeyer oak “provides rich layers of toasted nut, vanilla, and allspice,” he says. Chad Johnson of Dusted Valley Winery in Washington says, “We are working towards using predominantly Minnesotan and Wisconsin oak in our high-end wines.”

Staggemeyer staves are shipped all over the world, says Duane Wall, cofounder of NadaliÃ© USA cooperage in California’s Napa Valley: “We have customers who specifically ask for Minnesota oak.”