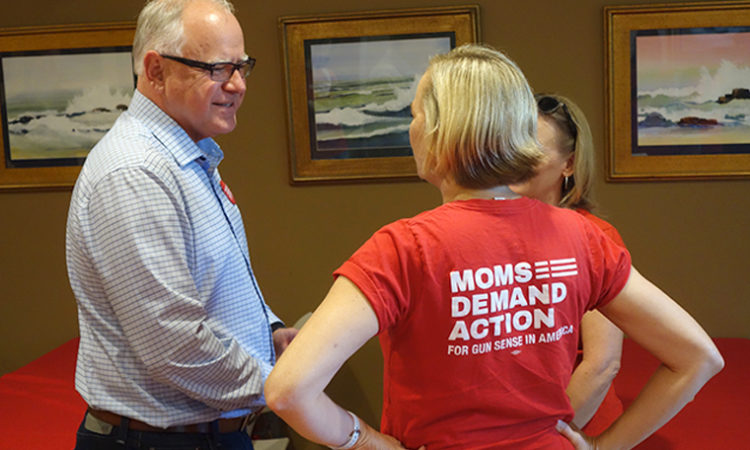 Not Sticking to His Guns: In Race for Governor, Walz Embraces Role as Gun-Control Candidate

Walz has stuck with a message that he used in the DFL primary: that it will take someone like him — someone who owns guns and knows gun culture — to work with people on both sides of the issue to find compromises on gun control.
By Peter Callaghan
September 13, 2018

Tim Walz might not have been the first choice for governor of many of those who attended a meeting Wednesday in a St. Paul brewery. The DFL congressman did not have the bona fides on the issue that members of the group Moms Demand Action is organized around: gun safety laws in response to deadly school shootings around the country.

While the six-term congressman has changed some of his positions on gun laws over the last several years, Walz wasn’t Erin Murphy, the DFL primary candidate who backed the strictest gun control measures. Walz had that pesky rÃ©sumÃ© item of having been endorsed by the NRA in the past, and then there were the photos: pictures of Walz wearing a camo hat with the message, “Tim Walz: NRA Endorsed.”

Then came the primary. Not only did Walz easily defeat both Murphy and state Attorney General Lori Swanson, his victory set up a general election against a Republican candidate whose positions on the issue are the opposite of Moms Demand Action. Unlike Tim Pawlenty, who was expected to win the GOP primary right up until he didn’t, Hennepin County Commissioner Jeff Johnson opposes any additional controls on guns.

During the primary campaign, Walz had shared the “Gun Sense” candidate designation with Murphy. Now he is the sole candidate in the governor’s race with the endorsement, and Wednesday he embraced it, complimenting groups like Moms Demand Action for changing the conversation around gun safety. “We can’t live like this,” he told the group. “We can’t go on like this. Something has to change.”

Walz then stated the obvious, that he and Johnson have very different positions on gun safety and gun control. “Elections are binary choices and sometimes that’s very frustrating,” Walz told the several dozen people gathered at the Urban Growler in St. Paul. “But in this case, especially as it deals with gun violence … you could not have a broader split between the two candidates.”

In the primary, Walz suffered from the comparison to Murphy among voters who back gun control measures. In the general, he stands to benefit from the comparison to Johnson among those same voters. But the former Mankato school teacher has stuck with one message that he used in the primary: that while passion on the issue is important getting legislation passed is better; and that it will take someone like him — someone who owns guns and knows gun culture — to work with people on both sides of the issue to find compromises.

“Endorsements are not a pat on the back,” he said. “They are much more kicks in the butt.”

He said he knows he is expected to get things changed. “It’s not good enough to be right on the issues if we can’t build the coalitions to move things forward.”

At the Wednesday meeting, the first question from the audience was about what was described as Walz’s conversion, from a politician who would receive an ‘A’ grade from the NRA to one currently earning an ‘F’ from the gun-rights group. While Johnson has accused Walz of changing his position as he moved from running for Congress in a more-conservative Southern Minnesota to a statewide run for governor, Walz says his views on the issue have been altered by gun violence and what he says are more-strident positions of the NRA.

“We’re all products of our past,” he said, before telling a frequently told story about how his high school classmates would bring their shotguns to school so they could hunt birds after football practice.

“I do support the 2nd Amendment,” he said. But what he termed, “responsible gun owners,” are accepting of background checks for gun purchases, red-flag warnings for those who shouldn’t own guns and bans on bump stocks that give semi-automatic weapons the capabilities of automatic weapons. “I can’t drive 80 miles per hour on the sidewalk just because I want to and I’m good at it,” he said.

Walz said there are urban-rural differences on the gun issue, mostly because of the difference in gun prevalence and gun culture. Hearing gunfire outside the St Paul brewery would elicit a different reaction than hearing the same in rural Minnesota, he said.

The former would make people think that something was wrong while the latter would suggest “that hunting season had started.” Gun violence is a problem in both places, however, and both might support some changes to make firearms less available, though he said there is less sense of urgency in Greater Minnesota than in the Twin Cities.

“This whole idea that guns and the number of guns don’t make any difference … for God’s sake, if there were more banana peels on the floor we’d have more people slipping on banana peels. And if there are more guns, more people are going to be killed by guns.”