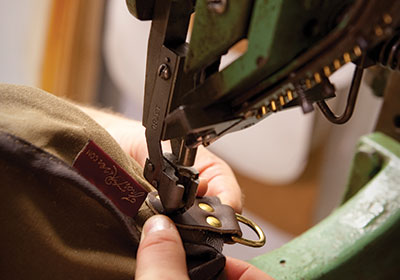 New cut-and-sew businesses are sprouting up on the North Shore, inspired by the craft mentality and sturdy outdoors ethos.
August 01, 2016

You can actually buy a pair of shoes made in Duluth. They’re made by hand by Candace LaCosse, whose company, Hemlocks Leatherworks, produces chukka boots for men and women, slip-ons for women and stylish leather bags.

LaCosse made her first pair of shoes in 2011 at the North House Folk School in Grand Marais. She was inspired by the professional craftspeople she met at the school, which teaches a variety of crafts, from baking to blacksmithing. “It was really eye-opening to be in this great, incredible network and community of artists and craftspeople who were making it their full-time living,” LaCosse says. After apprenticing with a master shoemaker in New Hampshire, LaCosse launched her line of shoes, building recognition through the American Craft Council and its events across the country.

But LaCosse always wanted to go back to Duluth, where she’d studied graphic design and journalism. After returning to Duluth, she began participating in and hosting pop-up shops and trunk shows. “That was very encouraging to me because it proved that Duluth really likes my products and really wants to see local handmade items here,” LaCosse says. “And they want to buy them.” Much of her sales are online.

LaCosse’s experience is just one of several such stories that have been sprouting in Minnesota’s Northland over the past few years. They’re building upon a cut-and-sew industry on the North Shore that has had a presence there for decades. In the past 10 years, that industry has undergone a second flowering as companies including Aerostich, Duluth Pack and Frost River Trading Co. grow and prosper. They are selling their goods internationally.

Neverest Outfitters, based in downtown Duluth, makes backpacks such as this Forester model.

As more consumers seek American-made craft products—goods that are more than just a brand name—the North Shore is becoming home to an inspired new generation of small manufacturers.

Ian Scherber always has been his own boss. He started screen-printing T-shirts in high school in Proctor, the next town southwest from Duluth. While still in college at St. John’s University—he graduated just last year—he launched two businesses, Neverest Outfitters and Duluth Screen Printing Co., with partners Mary Rumpca and Luke Inveiss. Both firms have their headquarters in a second-floor space in downtown Duluth previously occupied by a canoe paddle maker. Scherber shares the work space with two companies also founded by 20-something entrepreneurs: Black Feather Creative, a photography and videography firm, and Pure Clean, a building cleaning service.

In building his companies, Scherber was inspired by the reuse and durability philosophy of Patagonia founder Yvon Chouinard. Duluth Screen Printing’s T-shirts are meant to last, “not end up as rags in a year or two,” Scherber says. Neverest’s packs and bags are made mostly from reused fabric and leather scrap that Scherber has been able to find from a variety of higher-end manufacturers. He can then create products that are durable and American made, but still affordable.

Another distinctive business with high-quality products is Frost River Trading Co. in Duluth. It makes packs, luggage and other goods primarily for the outdoors and travel markets. Like Scherber, Frost River owner Chris Benson emphasizes durability. “Our products are made so that they can be fixed,” says Benson, whose goods all come with a lifetime warranty.

Frost River now has about 70 wholesalers, including several outside the United States. While the made-in-Duluth label makes the biggest difference regionally, Benson says, what’s been more important is that Frost River’s products are made in the United States. “It’s something that consumers are more comfortable seeking out nowadays,” he says. “And they understand that it’s going to come at a price.”

Ian Scherber launched Neverest Outfitters while he was a student at St. John’s University in Collegeville, Minn.

Benson wants to keep his products priced moderately, and primarily use U.S. suppliers. Frost River buys its leather from S.B. Foot Tanning Co., which is owned by Red Wing Shoes. Finding American suppliers can be a challenge, but it’s one Benson wants to meet. He describes the weaving together of his supply chains as “an orchestra of manufacturing.”

In the craft zone

“Really, it’s urban manufacturing,” says Lars Kuehnow, neighborhood development officer with the Local Initiatives Support Corp. (LISC) in Duluth. He’s talking about the type of businesses that the nonprofit LISC and other organizations want to attract to the Lincoln Park neighborhood a couple of miles southwest of downtown Duluth. Once a vigorous industrial district, Lincoln Park fell into decline a few decades ago.

But green shoots have been sprouting. Frost River, Duluth Pack and Aerostich are already there. The neighborhood also is home to two craft breweries, Lake Superior and Bent Paddle. LISC and other organizations are seeking to encourage more entrepreneurial activity with a storefront rehab program and other efforts to create a craft business hub that Kuehnow hopes will “change the narrative” in this part of Duluth.

One of the area’s newest business residents is Hemlocks Leatherworks. LaCosse moved there in May, down the street from Frost River. Her new, larger space will, in time, allow her to add employees and new products. LaCosse is currently working on designs for sandals.

In downtown Duluth, Neverest is working on new packs and bags, including products made completely with recycled or reclaimed material—everything from the thread to the fabric, Scherber says. Some will even be constructed from old truck tarps and vinyl billboard material. Neverest also is replacing metal clips and connections with surprisingly durable hardware constructed from recycled cardboard.

“This is my home,” Scherber says. “And I really want to make a difference here.”