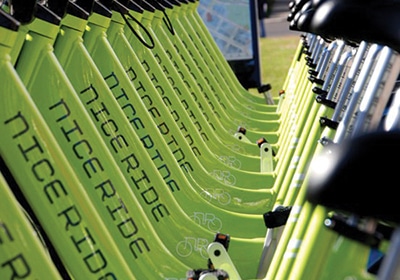 Nice Ride Is “Braking” Even

Nice Ride Minnesota started on training wheels in 2010. Now in its fifth year, the green bikes seem to be everywhere. But how is the nonprofit operation doing financially?

“About 60 percent of our operating costs have been covered by revenue from the system,” says Bill Dossett, executive director of Nice Ride Minnesota, referring to subscription and rental fees from Nice Riders.

Dossett says that for 2014, Nice Ride’s metro operations budget is $1.46 million. He’s expecting $870,000 in rider fees and $590,000 from sponsorships and grants. The nonprofit is effectively a break-even operation, he notes. The Twin Cities system now includes 170 stations and 1,500 bikes. (This year Nice Ride launched a pilot program in Bemidji, which has a separate budget.)

Dossett points out that sponsors such as Target Corp., Dorsey & Whitney and the Birchwood CafÃ© have backed the program since the beginning. Through 2013, primary sponsor Blue Cross and Blue Shield of Minnesota had kicked in $3.73 million, most of which has helped pay for bikes and stations. It cost $7.7 million, including some public money, to build the Nice Ride system. (Taxpayer dollars are only used to purchase bikes.)

Public Bike System Co., Nice Ride’s Canadian supplier, filed for bankruptcy this year. Dossett says that meant that Nice Ride could not add 17 new stations as planned. Nonetheless, other cities are embracing bike-sharing. Chicago launched the Divvy system, owned by the city, in summer 2013. The Chicago program has 300 station and 3,000 bikes.

“We’re actually forecasting a profit for this year,” says Sean Wiedel, assistant commissioner with the Chicago Department of Transportation.

New to Nice Ride this year is a “pay-as-you-go” plan to entice riders wary of the annual subscription. Dossett says it is bringing more riders, noting, “You can have the best product in the world, but you really have to figure out how people want to use it.”