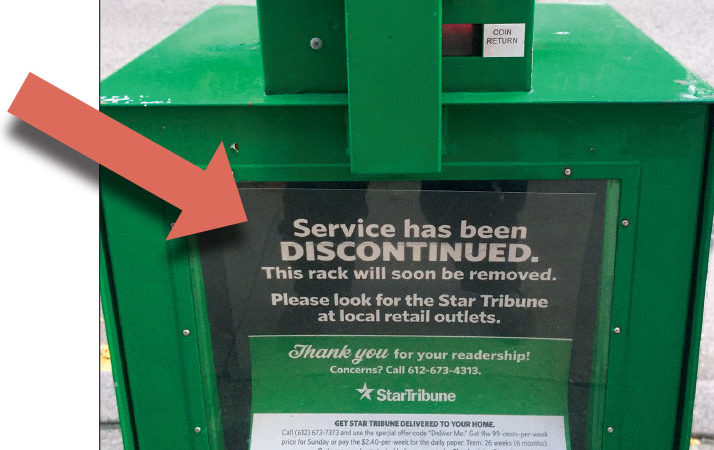 Newspaper Racks Are On the Decline

Newsstands are long gone. Yet even in the digital media age, when many readers no longer get the physical product, coin-operated newspaper boxes survive. But the racks are not immune from market realities.

The Star Tribune recently yanked a small but unspecified number of its green news racks off the streets.

“We are removing some underperforming racks around the metro and emphasizing retail sales (i.e., grocery and convenience stores) in those locations. Just business-as-usual optimization,” says Steve Yaeger, spokesman for Minnesota’s newspaper of record.

Newspaper racks are driven by another fading remnant of the past: cash. To buy a daily weekday edition of the Star Tribune, customers need $1.50 in spare change. The machines accept nickels, dimes, and quarters. Holding your smartphone up to the box won’t open it.

“A lot of our member papers do still use news vending machines,” says Stan Schwartz, spokesman for the National Newspaper Association. But the group does not have statistics about how widely or narrowly the racks are still used across the U.S.

Despite challenges, the Star Tribune still maintains a large fleet of boxes throughout the state.

“As single-copy prices increase, requiring consumers to have many quarters, this channel of sales has become outdated. For that reason we are retaining only high-traffic locations,” says Yaeger. “Even with that, we have many hundreds of coin racks around the metro area and in greater Minnesota.”