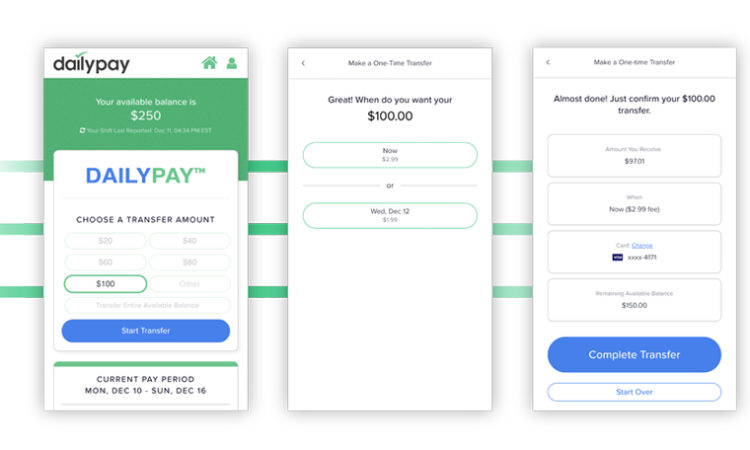 Fast-growing DailyPay cited the local culture of innovation as a key reason for choosing Minneapolis for its second office.
By Amanda Ostuni
May 09, 2019

An app that allows employees to control when they get paid will soon deliver jobs to Minnesota.

DailyPay partners with employers to provide workers with the option of instantly accessing earned wages—up to 100 percent of their paycheck, with the limit set by the employer. The idea is to improve the financial security of employees by allowing them to pay bills or sudden expenses without waiting for a standard bi-weekly pay day.

“We want to provide… on-demand access to your earnings as you need them,” says Rob Law, DailyPay co-founder and CTO, “so that you can be more deliberate with what you’re spending and when, and prevent needing to go into debt or use [an expensive financial alternative] just to get by.”

Founded three years ago, the expansion to a second office comes as DailyPay is in rapid growth mode. Now, with more than 110 partners nationwide, DailyPay chief of staff Preeti Krishnan says the company wants to geographically position itself to better serve customers throughout the country.

Minneapolis offers the central location and proximity to DailyPay partners including BiteSquad, SMR Automative, and Wireless Vision. But the local startup culture sealed the deal.

“Minneapolis has just culturally become one of the country’s top cities for entrepreneurs and startups, and there’s a sort of undeniable surge in the startup culture in Minneapolis,” Krishnan says. “We were eager to become a part of the city’s evolution.”

“This is a highly concentrated market for finance, and that’s important to a company that’s looking to grow access to talent and access to industry knowledge,” Frosch says. “And we’re working to build up that sector [further].”

Minneapolis and DailyPay share a commitment to mission-driven entrepreneurship, Frosch says. He notes that startups in general are increasingly focused on their broader purpose— “taking on a really big challenge that matters to a lot of people across the country in the world.” That sensibility is becoming core to the Twin Cities’ approach to entrepreneurship, Frosch says.

“We’ve been very impressed with the level and quality of the peer network and programs that are available to develop tech talent,” DailyPay’s Krishnan says. “The resources that the city avails the tech community are unparalleled, from what we’ve seen and heard.”

DailyPay plans to hire a Minneapolis-based vice president of payment operations, and has already begun the recruiting process to build out its team. The company currently employs 100 people at its New York headquarters.

No specifics yet on location, but Krishnan says the company expects to secure office space early this summer.

“We’re very, very excited to be a part of this community. [It’s] a wonderful opportunity to become a part of a thriving startup culture, and to really make a difference in an area that really does prioritize technology that solves problems,” says Krishnan. “We’re excited to see what the future holds.”