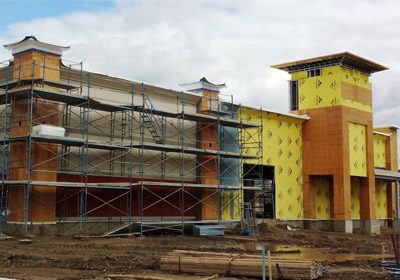 Twin Cities at Eagan, an upscale outlet mall that is slated to open next August, added 19 more retailers to its tenant list, which already included Saks Fifth Avenue Off 5th.
October 12, 2013

As construction continues on a large outlet mall in Eagan, the project’s developers on Wednesday added to a growing list of tenants that will occupy the retail center.

Paragon Outlet Partners, the Baltimore-based company developing the new Twin Cities at Eagan outlet mall, began construction on the project in June and plans to open it in August 2014. The 409,000-square-foot center will be anchored by a Saks Fifth Avenue Off 5th store.

Paragon Outlet Partners Principal Nicholas King said in a statement that the leasing process is “moving at a tremendous pace.” He said that Twin Cities at Eagan will eventually include access to more than 100 “of the world’s most iconic brand names.”

Paragon said it expects the project to require 400 construction jobs and create up to 2,000 permanent jobs. Paragon’s parent company, The Lightstone Group, has a real estate portfolio that includes more than 8.1 million square feet of commercial space and more than 11,000 multi-family units in 19 states.

A recent report from Seattle-based Colliers International found that the Minneapolis-St. Paul area is leading the nation in retail construction with 1.2 million square feet of projects underway, and the Twin Cities at Eagan project is a key contributor to that ranking.

Another major local project: Bloomington-based United Properties and Edina-based Jerry’s Enterprises, Inc., are starting construction of Bielenberg Gardens, a new retail center in Woodbury that will be anchored by a grocery store.

Meanwhile, retail projects can fuel additional development. For example, the Pioneer Press recently reported that Apple Valley-based Stonebridge Companies hopes to build a 180-unit apartment building with up to 14,000 square feet of attached retail beside the Twin Cities at Eagan outlet mall.