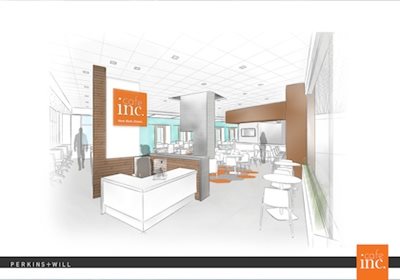 Amid a growing trend of so-called "co-working" spaces in the local market, Cafe, Inc. has ambitious plans for opening multiple Twin Cities locations and then expanding to other cities.
By TCB Staff
December 05, 2013

Cafe, Inc., which will open a roughly 6,500-square-foot space in Edina in mid-January, is the latest firm to join the so-called collaborative workspace, or “co-working,” trend, and it has ambitious plans for the Twin Cities and beyond.

The firm’s management team, which includes investors, board members, and strategic business partners, said that the firm’s purpose is to provide professionals with an accessible and affordable shared working space that also offers amenities and security features typical of a traditional corporation.

Cafe, Inc., joins a growing co-working trend in the Twin Cities. There’s Joule in Minneapolis, and CoCo, which, in addition to its existing locations in St. Paul and downtown Minneapolis, opened a new, 15,000-square-foot location in Uptown Minneapolis this fall. CoCo, which has received national attention for its co-working model, was recently named one of the 17 “coolest co-working spaces in America” by news website Business Insider and has partnered with Google, Inc., to host workshops and entrepreneur events.

Funk told Twin Cities Business that Edina was selected for Cafe, Inc.’s first location because the firm plans to introduce its offices “in retail locations off major highway arteries that are very easy to access with free parking.” He added that the firm is planning to open its next three to five locations in the Twin Cities before expanding to other metropolitan areas, such as Chicago or San Francisco.  The firm has ambitious plans to open approximately 100 locations, some corporate-owned and others franchised, in the next five years.

According to Funk, Cafe, Inc. aims to attract a variety of customers, including students, entrepreneurs, business professionals, and small companies.

“Cafe, Inc. is targeting [those] that are looking for an alternative to leasing space but are not excited about working in coffee shops and at home,” he said. “Eventually, we are looking to serve a few large organizations that are moving towards diversifying their real estate portfolios. Their plan may be to work with Cafe, Inc. to offer a network of satellite sites around the metro where employees can meet and remain highly productive . . . and downsize their headquarter space.”

The first location of Cafe, Inc., which will be located off the corner of I-494 and Hwy 100, will allow members to reserve conference rooms to meet with clients, work privately at a desk, send and receive mail, and print and shred documents. The space will also include an “upscale fast-casual” restaurant that features food, coffee, beer, and wine. Professionals can visit Cafe, Inc. seven days per week from 6:00 a.m. to 10:00 p.m.

The firm will offer several membership options, starting at $49 per month for an entry-level “flex membership” in addition to a $99-, $199-, and $399-per-month options. The plans offer different levels of accessibility and hours individuals can reserve space. Cafe, Inc., also plans to introduce corporate and group memberships within the first few months of its January opening. Additionally, each membership plan will include guest and meeting passes, and day passes will be available for walk-ins.