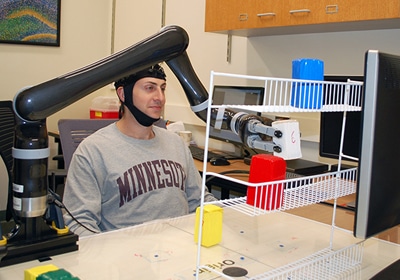 Researchers believe the study opens doors to treating millions of people in the world who are paralyzed or suffering from neurodegenerative diseases.
December 24, 2016

What may have appeared to be science fiction years ago is reality today: The mind-robotics connection is possible, according to researchers at the University of Minnesota is what they’re calling a “major breakthrough.”

“This is the first time in the world that people can operate a robotic arm to reach and grasp objects in a complex 3D environment using only their thoughts without a brain implant,” said Bin He, a biomedical engineering professor at the University of Minnesota. He was also lead research on the study, which was published in the Nature research journal on Thursday.

Previous mind-controlled prosthetics required implants or surgery to allow brain signals to communicate with a robotic limb. With He’s never-before-achieved technique—called electroencephalography (EEG) based brain-computer interface— he expects there will be a huge shift toward non-invasive routes in his field.

“We see a big potential for this research to help people who are paralyzed or have neurodegenerative diseases to become more independent without a need for surgical implants,” He said.

In He’s experiment, subjects were equipped with an EEG cap, which was designed to read electric currents in the brain’s motor cortex and translate those “thoughts” into actions. As subjects thought about motor functions, such as moving one’s own arm to pick up a block, the robotic arm would oftentimes do the same.

“Three years ago, we weren’t sure moving a more complex robotic arm to grasp and move objects using this brain-computer interface technology could even be achieved,” He said. “We’re happily surprised that it worked with a high success rate and in a group of people.”

Next up, He anticipates pushing the brain-computer interface technology toward controlling a robotic limb attached to a person’s body, or how the technology could work with someone who has had a stroke or is paralyzed.

The full report on He’s experiment can be viewed here.