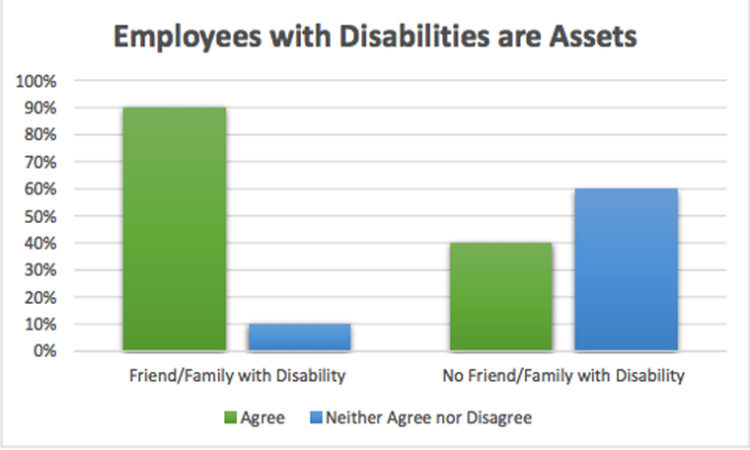 Data gathered through the MDI-St. Thomas study on workforce entry barriers faced by individuals with disabilities. (Photo courtesy of MDI)

A new study released by University of St. Thomas Opus College of Business and local nonprofit manufacturing company MDI confirms what most of us probably suspect: individuals with disabilities face implicit bias when it comes to trying to enter the workforce.

Barriers on the would-be employee side include challenges with life and communication skills, logistical issues, such as commuting, and lack of awareness of employment resources.

The research team – comprised of four students from the business class taught by professor Avinash Malshe in the recent spring semester – began the study by examining existing academic research on the employment landscape.

They then conducted in-depth interviews with human resource professionals, job coaches and paraprofessionals, psychologists, program coordinators and individuals with disabilities.

One team member, Joan Chirchir, explained that for the most part, none of the students had much academic or personal experience related to people with disabilities, and though some findings were as imagined, they encountered unexpected aspects of the issue.

She says one of the key findings of the research that most surprised her was how much the simple act of exposure could make a difference.

“The people who have had some sort of personal experience with people with disabilities were… willing to give them a chance to try and be successful at a job,” says Chirchir.

Another finding was that there’s a lack of understanding of the diversity of the spectrum – people tend to group individuals with disabilities into one overarching category, despite individuals having a wide range of gifts and capabilities. These people, says Chirchir, have “so much potential” but are “written off by society.”

For its part, Minneapolis-based MDI hires many individuals with disabilities for production roles, across its four locations. McDermott admits those positions are generally unskilled labor and the company doesn’t require high school diplomas, but he notes they are purposeful jobs and there are indeed educated IWDs among staff – including one person with a PhD who “happens to have a disability.”

From research to realization

Armed with their findings, the research team made recommendations for improving the odds of businesses hiring individuals with disabilities.

For example, MDI built sliding doors at one location, and the company has an HR director on site at each location to work directly with people with disabilities – helping them find transportation, providing ongoing support, etc.

In general, McDermott says the financial cost isn’t significant, and it’s worth that effort, because individuals with disabilities can make great employees.

The research team suggested MDI can spread this idea through various means, including: participating in St. Thomas roundtable discussions, in which MDI would speak to CEOs about IWDs in the workforce; conducting volunteer events with businesses and individuals with disabilities; and utilizing social media.

MDI plans to pursue these courses of actions, likely starting with the roundtables.

“[We want to spread] awareness, and the appreciation and the understanding – we’re addressing some of those misperceptions and stereotypes,” says McDermott. “It’s a journey. This is a marathon. It’s not a sprint but we want to continue to do our part to advance the mission.”