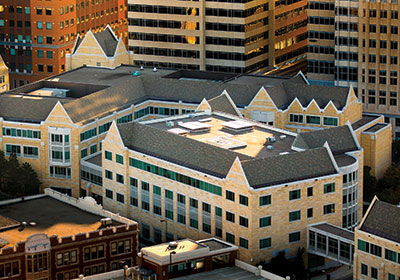 Dr. Stefanie Lenway will reach out to Mayo, UnitedHealth in her new role at the university’s Opus College of Business.
September 01, 2014

She was building her academic reputation over 21 years at the Carlson School of Management, ultimately rising to associate dean at one of the best business schools in the United States.

Then she left the Twin Cities in 2005 to become the business dean at the University of Illinois in Chicago, and in 2010 she accepted the dean’s position at the Broad College of Business at Michigan State.

“When I left Minneapolis, I never thought I’d come back in a different incarnation,” says Lenway, who is the new dean of the Opus College of Business at the University of St. Thomas.

She is succeeding Dr. Christopher Puto. The changes he led during his 12-year run as dean caused St. Thomas to pop up on Lenway’s career radar screen. During Puto’s tenure, the faculty size doubled, the Schulze School of Entrepreneurship opened, and St. Thomas joined Carlson and other U.S. business schools that are accredited.

Shortly before beginning her new job on Aug. 1, Lenway spoke with Twin Cities Business about how she intends to lead the St. Thomas business college and connect with the Twin Cities business community. Puto, in a separate interview, talked with TCB about the condition of the Opus College, including the philosophy behind revamping the MBA program. 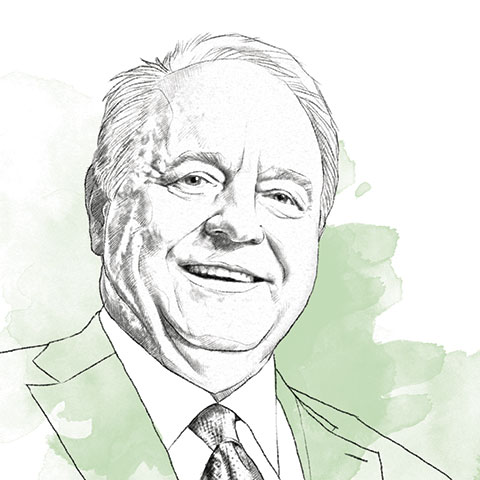 Puto, 72, served as dean of the Opus College of Business at the University of St. Thomas from 2002 to 2014. After a one-year sabbatical, Puto will return to the St. Thomas faculty.

He holds a bachelor’s in economics from Spring Hill College, an MBA from the University of Miami and a doctorate in marketing from Duke University.

Prior to joining St. Thomas, Puto was the dean of the McDonough School of Business at Georgetown University. 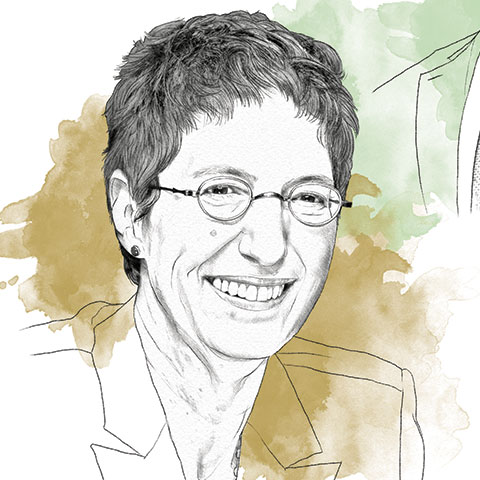 Lenway, 64, begins her new job as business dean at the University of St. Thomas after serving as dean of Michigan State University’s Broad College of Business since 2010.

Lenway has a lengthy academic history in Minnesota. She was a faculty member and administrator at the University of Minnesota’s Carlson School of Management from 1984 to 2005.

A new strategy for St. Thomas?

Lenway, 64, is a native of the San Francisco Bay area, but developed deep roots in Minnesota during her work at the Carlson School of Management.

“My goal is not to replicate Carlson, but to make St. Thomas something distinct in the market and attractive on its own merits,” Lenway says.

During the interview process for her new job, she adds that she was impressed with the breadth of the St. Thomas offerings in entrepreneurship. Best Buy founder Richard Schulze and his late wife donated $50 million to support the Schulze School of Entrepreneurship.

Based on her initial analysis, Lenway notes that entrepreneurship is a differentiator for the St. Thomas business college brand.

She anticipates spending a good chunk of her time off-campus talking with business leaders, including those in the health-care sector.

“I’d love to connect with the Mayo Clinic,” she says. “St. Thomas also has a very strong relationship with UnitedHealthcare, which I’d like to build. That’s a start. I do think the college will have to do some careful strategic analysis to figure out what part of health care to focus on, because it’s [a] huge [field].”

In the past few years, she explains, “I have been working at Michigan State in analytics and on the IBM Watson efforts to create decision-support mechanisms for different parts of medicine like oncology.”

Ally in the president’s office

Lenway and Dr. Julie Sullivan, who is beginning her second year as president of St. Thomas, both hold doctoral degrees in business.

“The fact that [Sullivan] is a professor of accounting was a huge attraction [in accepting the Opus job], without a doubt,” Lenway says. On many U.S. campuses, she adds, “business schools aren’t uniformly understood as academic undertakings by the rest of the university.”

But in Sullivan’s case, Lenway emphasizes that the university’s president grasps the challenges of leading the business college and recognizes its unique role within the university.

As she takes the reins from Puto, Lenway says that Sullivan wants her to “build a brand and market presence” for the Opus College and to launch new programs that “make sense strategically.”

Before she launches into marketing efforts that could elevate the St. Thomas profile, she’s pledging to engage in a systematic strategic analysis with St. Thomas faculty and staff. She wants to assess the business college’s strengths and examine competing schools to see where St. Thomas “could create an identity based on the capabilities and interests of the faculty.” 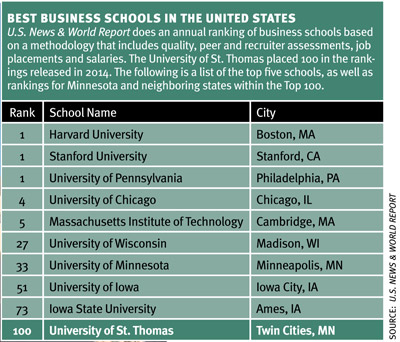 On the university’s campuses in Minneapolis and St. Paul, one in three St. Thomas students—undergraduate and graduate—is working on a business degree.

In U.S. News & World Report’s annual ranking of the top business schools in the nation, St. Thomas finished 100 in the 2014 assessment. The University of Minnesota’s Carlson School came in at No. 33.

Puto, 72, who is taking a one-year sabbatical before returning to the St. Thomas faculty, says that some students use the U.S. News rankings when deciding where to enroll.

The rankings “are flawed by nature because they are abstract measurements,” Puto says. “Any school that has a dean that panders to those rankings probably has potential problems they are heading toward. At the same time, if you ignore the rankings you are also headed toward problems.”

The goal at St. Thomas is to achieve a U.S. News ranking within the Top 50 schools. “We had to get accredited before we could be anything,” Puto stresses. (St. Thomas gained its accreditation from the Association to Advance Collegiate Schools of Business International in 2011.) “In our first three years, we made the Top 100, which is out of 450 [schools]. So we are in the top 25 percent right now.”

Forty-three percent of undergraduates and 30 percent of graduate students were business majors during the 2013-14 school year, when the university’s overall enrollment was 10,221 students.

For the 2013-14 school year, St. Thomas had 1,145 graduate students enrolled in seven master’s programs at the Opus College. About 2,300 undergraduates were business majors, and St. Thomas offers 13 business concentrations.

For the full-time MBA program, Puto says, “we intentionally shrunk it because we were experiencing higher attrition rates than we thought appropriate. So we tightened our admissions standards, which then reduced the size, and we have maintained these standards and the size has now grown.”

Not long after Puto became dean in 2002, he led the creation of a new full-time MBA program. “We examined the programs at Harvard, Michigan, Duke and Northwestern to see what their curricula looked like,” Puto recalls. St. Thomas decided to add some content to its program, including finance and marketing courses.

It also altered its course structure, so business students would emerge from St. Thomas as more effective communicators.

St. Thomas created a series of credit-bearing laboratories that first-year students take. “Our students are taught by trained communications professionals in oral and written communications,” Puto says. “They have to make a presentation and write a paper in one of the core courses to which the laboratory is attached and they get two grades.” The classroom professor grades the student on the substance of the business content. The communication professor weighs in with a grade about how well the student communicated.

President Sullivan, in a late 2013 interview with TCB, talked about how she views her university’s role in educating future business leaders.

“For many years we have focused on producing what we call principled business leaders,” she says. “They are leaders of high integrity, who can see the big picture, care about the profitability of their businesses, but also care about the businesses of their communities and the world.”

As the world’s economy changes dramatically, Sullivan notes that it’s important to be “in dialogue with business” so St. Thomas programs can be refreshed, adapted and developed to meet the evolving needs of companies.

“We want to have global leaders,” Sullivan says. “Our business school is focused on students studying abroad, on bringing in international students and ensuring that our graduates are comfortable working in a global environment.”

The president also stresses the niche of the Schulze School of Entrepreneurship to help innovative business people take an idea to a viable concept.

“Originally, we were mostly male and mostly white,” Puto says. But he adds that Minnesota corporations are placing a higher premium on diverse workforces, and the full-time MBA program is showing much greater racial diversity.

Among the 91 full-time MBA students in 2013, 54 were white, 11 were nonresident aliens, 10 were black, seven were Asian, five were Hispanic and the remaining four were multiple races or their race or ethnicity was unknown.

St. Thomas has been diversifying its faculty, and Puto indicates that he thinks it will influence who enrolls in the Opus College.

Women hold 33 percent of the full-time faculty positions. Nine percent of faculty members are minorities from the United States and 20 percent are foreign born.

Lenway is committed to fostering greater diversity on the Minneapolis and St. Paul campuses. “A lot of it is just about money,” Lenway explains. She favors expanding scholarship aid.

“People need financial support to make this kind of investment of time,” Lenway says. “The talent is there. It’s just trying to support people in their aspirations.”

As she begins her new leadership role, Lenway says she will focus on working closely with faculty so that a consensus can emerge for a clear vision for the Opus College.

“I’m a silo buster,” she says, explaining that she likes to collaborate among different functions and academic disciplines on campuses.

“I’m a consensual leader, but I do make decisions,” Lenway says. “I do try to bring out the best in my team, because every job I’ve had was bigger than me. So a lot of what I do is work with my team and make sure they’ve got everything they need to be successful. I believe in leading through a vision more than anything else.”