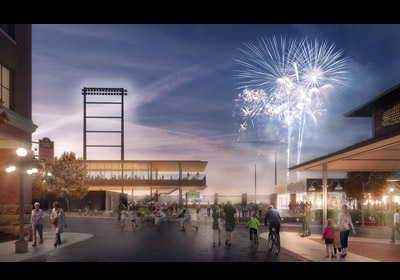 Ryan Companies’ design team released several renderings of the planned ballpark, which is slated to open for the 2015 season.
December 15, 2013

New renderings of the planned St. Paul Saints ballpark were released Thursday, giving the latest insight into what baseball fans can expect to see at the new stadium that will be built in St. Paul’s Lowertown neighborhood.

Crews are expected to finish demolishing the former Diamond Products building in downtown St. Paul on Friday, and following site preparation work, construction of the new ballpark is slated to begin in the spring. The ballpark is scheduled to open in time for the 2015 season.

The new renderings, one of which appears above this story and two are shown below, are meant to show how the new ballpark will integrate with the surrounding neighborhood. (Earlier plans had reportedly come under fire for lacking a downtown feel.)

Minneapolis-based Ryan Companies US, Inc., was awarded the contract to design and build the new $63 million Saints ballpark. It worked with Minneapolis-based Julie Snow Architects and international firm AECOM to develop the new design and renderings.

The City of St. Paul said that the design “incorporates elements of Lowertown’s historic architecture—blackened steel, timber, and load-bearing masonry—in a setting that has a more innovative approach to become a new connection for the eastern edge of downtown St. Paul.”

The field and seating bowl will actually be located below street level, “reducing the overall visual impact of the ballpark on the neighborhood while enhancing entry plaza connections and accessibility,” the city said in a press release.

The design team is working with the State Historic Preservation Office on the ballpark’s design and will submit “more refined plans” later this month, the city added.

The new facility, called the Lowertown Regional Ballpark, will serve as the home of the St. Paul Saints, a minor league baseball team. It will also host “amateur baseball teams from across the region,” according to the city. The ballpark is projected to attract 400,000 people annually to downtown St. Paul; currently, the Saints play at a stadium in the Midway area.

The ballpark project received $25 million in state funds last year as part of a bonding bill that Governor Mark Dayton signed in June.