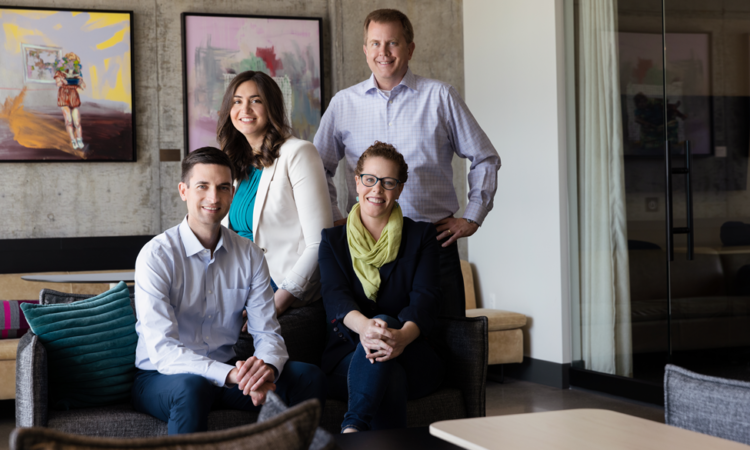 Engage Venture Partners, a new Minneapolis-based venture capital firm, plans to invest in medical technology companies, but it’s using an uncommon funding mechanism to do so.
By Dan Niepow
July 21, 2022

A quartet of med-tech pros has established a new venture capital firm that promises to shake up the investment world.

Known as Engage Venture Partners, the Minneapolis-based firm plans to invest in medical technology startups exclusively, but it’s operating a little differently than a traditional VC firm. For each of its investments, the company will establish a “special purpose vehicle,” or SPV. It’s a separate legal entity that exists solely for the purpose of investing in a single startup.

Steve Sigmond, founder and managing director of Engage, says the structure gives investors more control over where their dollars are going. In a traditional VC firm, investors provide money, and then fund managers determine where to put it.

“Anybody that signs up to be part of our investor network will have the opportunity to opt in or opt out of each of the deals that we show them,” says Sigmond, who previously served as CFO and founder of Minneapolis-based health care software firm Carrot Health. “You as an investor have a lot of control and ability to direct your dollars to support the companies that you’re interested. In that sense, it’s a lot like an angel investing model.”

Sigmond notes that Engage is not raising a fund, either. “The way that we’re bringing our investing product to market is not as a typical fund manager. That’s an important distinction,” he says. “Yes, we’re absolutely a venture capital firm, but the SPV model is really very different from the traditional venture capital fund.”

The SPV model of investment is gaining traction in Silicon Valley and New York, but it’s less common in Minnesota, Sigmond says. Still, the number of SPVs has been growing within recent years, according to Assure, a company that provides management and legal management services for SPVs. In 2021, SPVs raised more than $3 billion, up from about $1.7 billion in the prior year, according to Assure’s data.

Compared to typical capital firms, Engage also promises to charge less fees to investors. But Sigmond maintains that the firm’s structure will be beneficial to investor and entrepreneur alike. He says that Engage can serve as “single point of contact” for a wide group of investors, which theoretically opens up startups to many more potential funding opportunities.

“When you talk to entrepreneurs, you hear stories about how difficult it is to go out and raise seed money” from angel investor groups, which tend to be siloed, Sigmond says. “It’s just very time-consuming to make the same pitch over and over again.”

The firm plans to tailor its investments to seed- and early-stage companies, which means the check sizes might be a little smaller. Sigmond says the “sweet spot” for an average deal size would be between $750,000 and $1.5 million or so. The firm also doesn’t have a quota for the number of investments it makes each year. For Sigmond, it’s about quality over quantity. “We don’t have a schedule or mandate that we’re trying to stick to,” says Sigmond. “We’re very focused on keeping the bar absolutely high. … If we can only do one or two deals a year, that’s how many deals we do.”

In the med-tech space, proper vetting is crucial. Certainly, no investor wants to their name attached to a company like the scandal-plagued Theranos, whose CEO was convicted of fraud and conspiracy. Sigmond says Engage’s team has the chops to evaluate med-tech startups. “The amount of due diligence you have to do … is really tricky to do in med-tech,” he says. “We are specialists in med-tech.”

Prchal and Evans collectively own more than 50 percent of the company, which classifies Engage as a women-owned firm.

Engage has already made its first investment: The company has provided about $800,000 in funding for Minnesota-based medical device maker Melodi Health, which is developing a new product to help women undergoing breast surgery.