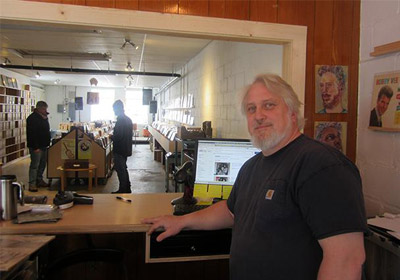 In the record-store nirvana that is the Twin Cities, the new kids on the block are Barely Brother Records, which celebrates its grand opening in St. Paul Saturday, and HiFi Hair and Records, which opened in Loring Park in November.

And while a bricks-and-mortar record shop with a focus on the seemingly antiquated format of vinyl in the digital age might seem like a crazy proposition, both shop owners say their efforts are acts of passion and sound business.

“It was actually my plan to do this when I got out of college in ’86-’87,” said Mike Elias, co-owner of Barely Brothers Records, standing behind his store’s counter Thursday.

“A friend of mine and I looked at a couple of places and we just never got around to doing it,” he said. “So, 37 years later, I’m finally doing it. I was talking to my daughter and she’s graduating from the University of Minnesota and she said, ‘I don’t have a plan, I don’t know what I’m doing, everybody seems to have a plan.’ I said, ‘I’m finally getting my plan.’ ”

As a whole, the healthy local record store scene reflects what’s happening worldwide, with vinyl LP sales spiking 33 percent and 6.1 million albums sold in 2013, which is a 250 percent increase since the 1993 low mark.

“There’s a resurgence in vinyl? I never knew it was gone,” said Jon Clifford, owner of HiFi Hair. “To be perfectly honest, I don’t know how to download music; I never learned how. It’s funny because in 1986 or so, everybody said, ‘No more vinyl, we’ve got these CDs now and we don’t have to lug these around anymore.’ And over the course of the past 30 years, the quality of the music has gotten worse and worse. The highs aren’t as highs, the lows aren’t as low, and the sound is compressed. Vinyl is just warmer. Suddenly people are realizing that the 17,000 songs on their iPod don’t sound very good.”

“It’s actually the only tangible form of music that’s growing,” said Elias. “Downloads are growing, but CDs are dying and every year vinyl’s been going up. There’s a lot more new releases coming out on vinyl, and I’ve got about one-third new vinyl here and two-thirds used vinyl.”

Record Store Day, that official celebration of all things vinyl and beyond, may not be until April 19, but every day is Record Store Day in the Twin Cities. And from the sounds of it, most of these independent retailers are in it together.

“It’s competitive because you’re all basically going for the same dollar, but I worked for seven years in the beer industry, and when another brewery did well, it brought attention to the beer industry,” said Elias, who has worked for mom-and-pop record shops most of his life. “So if somebody comes in here and says, ‘I didn’t know you could still buy records,’ it’s like, ‘Go to Cheapo, go to Treehouse, go to the Electric Fetus, everybody’s got records.’ Customer service goes a long way, and if you give a good recommendation to another store, it’ll come back to you. And a lot of those people are my friends, so I don’t see it so much as competition as helping another friend out and hoping they’ll do the same for me.”

What’s more, another attractive aspect of record-store shopping is the physical browsing experience that music lovers don’t get with downloads. Barely Brothers is located on Raymond and University, on the same block as Keys Restaurant, Swift Music and a couple of vintage clothing stores–an excellent destination point, in marketing jargon.

“If people are out shopping, they’ve got money in their pocket and they want to walk out with something, not go home and download it,” said Elias. “My first two weeks I sold two copies of ‘Safe As Milk’ by Captain Beefheart, and it was my proudest moment. I love my customers; if I could sell a copy of Captain Beefheart every week, I’d be a happy man. There’s a young couple who walked by here one night, they came in they go, ‘Oh, a record store!’ They came in and looked around and walked out with a [Mississippi] Fred McDowell record.

That also made me happy, because I’m a huge Fred McDowell fan.”