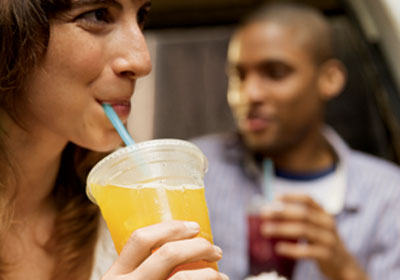 Caribou’s evolving ad campaign reflects the woodsy sensibility that originally set it apart from the urbane style of Starbucks.
June 06, 2013

Caribou Coffee, whose name was inspired by its founders’ travels in Alaska, has struggled beyond Minnesota. Which is why JAB Group, the company’s new Germany-based owners, announced in April that it would close 80 stores and rebrand 88 as Peet’s Coffee and Tea. (Only three of the closures will happen at home.) So it’s right that Caribou’s evolving ad campaign, created before the contraction was announced, reflects the woodsy sensibility that originally set it apart from the urbane style of Starbucks.

“There’s something aesthetically different from slicker coffee houses,” says Eric Husband, executive creative director at Colle+McVoy, Caribou’s Minneapolis-based ad agency. “There’s always a nice nod to the outdoors. We look at summer as an opportunity to reframe why you should be coming into a coffee shop.”

Part of that reframing is to focus on iced beverages instead of a hot cuppa joe. “All the sparkle, half the calories” read ubiquitous bus boards, with photographs of sparkling teas and juices. “Pairs are in season,” reads in-store signage, which shows a shot of a three-cheese classic sandwich and an apple-raspberry sparkling juice.

The campaign is an “evolution,” says Melissa Bertling, account director. The brand was relaunched three years ago, she explains, with a new logo. “We didn’t want consumers to say, ‘This is something really different,’ but wanted to make sure that it continues to seem really fresh and relevant.”

To keep it so, Caribou will use radio, bus boards and in-store advertising, which comes on the heels of a spring campaign that featured billboards and TV, a relative rarity for the chain. The same work is to be used for higher-viewing—and more coffeehouse-friendly—fall and winter seasons. (Per company policy, billings were not disclosed.)

Caribou will get out into the community with event marketing. It will also employ a social media strategy, and intends to go beyond Facebook and Twitter. “We wanted a campaign that was really ‘pinnable’ [for Pinterest] and was ‘Caribou’ at its heart,” says Bertling.

Caribou and Colle+McVoy, a 220-employee, $240 million shop owned by MDC Partners, both must hope that Minnesotans keep Caribou close to their heart as its owners’ strategy for its two coffee brands comes together.