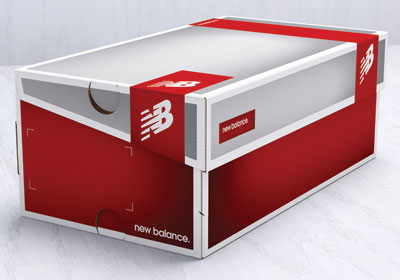 “New Balance had over 100 different boxes” for its shoes, says Todd Paulson, chief creative officer for Minneapolis design and branding agency Knock. “Every time they came out with a new shoe, they used an entirely different box.”

Thanks to Paulson and Knock, New Balance has a single box design—and one that earned the agency an international packaging award in late September. Knock’s box won a bronze in the Pentawards, a worldwide competition for packaging design.

New Balance tapped Knock to “globally reposition the brand connection in all its stores,” Paulson says. What Knock did, he adds, “was simplify the look.” The resulting design makes shopping easier for shoe customers; Knock also incorporated a labeling system that helps store staff quickly find the right product.

According to Paulson, Knock was one of the few U.S. design firms that the Pentawards honored this year. All the winners will be on display in February at the DesignPack Gallery in Paris.  “To be honored internationally is really cool,” he says.