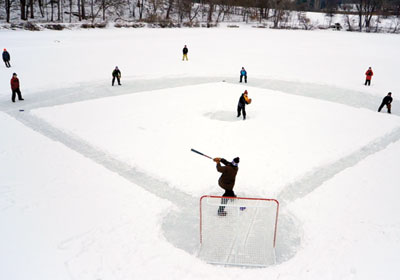 It’s the season where Target Field comes to life, to the thrill of thousands of Twins fans. But barely a ground-rule double away, inner-city diamonds are empty, the sport losing popularity to soccer and basketball among urban kids. The Twins Community Fund, through a campaign by Minneapolis-based Martin Williams, works to change that.

Beginning even before Opening Day, a new campaign urges young players (well, mostly their parents) to sign up for summer baseball and softball leagues.

Major League Baseball has always marketed the sport’s characters. But the new campaign focuses on character-building as a key reason to play baseball or softball.

“Huge Gains in Self-Confidence. Now There’s an Overlooked Statistic,” says one headline. “Respectful. Disciplined. Hardworking. Confident. Selfless. That’s What We Call a Five-Tool Player,” says another. “What He Lacks in Bat Speed He Makes Up For in Being a Solid Citizen,” reads a third.

“We’re making sure people recognize that the Twins Community Fund is bigger than the proposition of [donating] uniforms and equipment and fixing fields,” says Steve Casey, senior vice president and group creative director at Martin Williams. “It’s really what it can do for the kids, and what they can learn from being involved in baseball.”

The old-school appeal seems new—or at least rediscovered. Indeed, it seems countercultural, considering how clichÃ© smart-aleck kids and dumb dads have become. Conversely, character, a timeless value, has faded from marketers’ language, perhaps due to fears of appearing judgmental. But the national pastime nostalgia allows for a return to aspirational values.

The multimedia campaign includes print, television, and radio. There is no set media budget, but it will be seen and heard, at least by Twins fans, in radio and TV game broadcasts and in stadium programs. What can be tracked is how many kids sign up, says Tom Moudry, CEO and chief creative officer at Martin Williams. Moudry thinks metrics like that help hone a pro bono campaign.

“I judge the Effies [advertising awards based on a campaign’s effectiveness] every year, and this is the kind of campaign we should be judging,” Moudry says. It’s not the only nonprofit, pro bono work the firm does, but Martin Williams, a 170-employee firm, is careful what it chooses.

“If we’re going to do pro bono here, there is going to be criteria so we’re not just doing creative to get awards,” Moudry said. “We take these causes on if we think we can do some good work that makes a difference in terms of making the world a better place.”