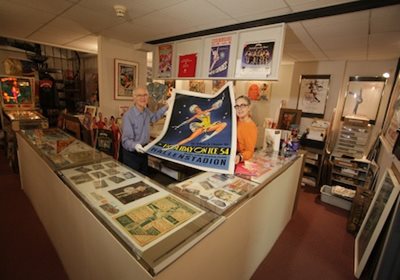 A Minneapolis-based filmmaker who created an ice-skating documentary for roughly $200,000 has garnered attention on the national stage—at festivals as well as in the New York Times—and will now reach a dramatically larger audience via Netflix.

The Fabulous Ice Age portrays the history of touring ice shows, documented through interviews with former skaters and producers.

Keri Pickett, a Minneapolis photographer and author turned filmmaker, told Twin Cities Business that she began filming in the fall of 2006 with the help of a four-member production team. Once filming had wrapped up, Pickett worked with Minneapolis-based post-production company Pixel Farm Digital. She said the total cost to create the film was between $200,000 and $220,000.

The Fabulous Ice Age has already appeared at a number of film festivals. It premiered at the Minneapolis/St. Paul International Film Festival in April, where it was named the official selection and won the audience award. The film then screened four times at the 2013 Napa Valley Film Festival, where Pickett said it was really “discovered.” Last month, it screened at the Frozen River Film Festival in Winona and recently played at a sold-out screening as part of the 2014 Dance on Camera festival in New York. It was that last screening that landed Pickett’s film on the front page of The New York Times’ arts section.

The Fabulous Ice Age also began streaming Monday on Netflix. While Pickett declined to disclose the terms of her agreement with Netflix, she said that her distributor, New York-based Virgil Films & Entertainment, introduced her film to the on-demand video streaming program and added that it will be available to stream “for quite a while.” She said that she expects the DVD release to occur in June.

Pickett said that while it remains to be seen how Netflix might financially affect her filmmaking in the future, she said the program is a platform for her to distribute her work to many.

“As a filmmaker, that is my goal: to try and get the film a wide audience,” she said. “Streaming on Netflix is good because the story I worked so hard to tell has the opportunity to be seen.”

Pickett said that her uncle, former figure skater Roy Blakey, inspired her to create the film.

“He planted the seed because of his ice stage archives,” she said. “He is passionate about figure skating and has this passion for preserving this history.”

The film explores Blakey’s “IceStage Archives,” which are currently housed in a studio on Hennepin Avenue in Minneapolis and includes approximately 26,800 pieces of memorabilia collected over the course of 70 years.

“The first touring ice show came out of St. Paul,” Pickett said. She added that Minneapolis entrepreneur Morris Chalfen significantly financed the “Holiday on Ice” production, and Bloomington-based ice skater Tom Collins was the one to put the “Champions on Ice” Olympic skater tour “on the map.”

Visit the documentary’s website to learn more about the film.

Director Justin Simien’s debut Dear White People—which follows four minority students as they attempt to find their place on an Ivy League campus—was shot at the University of Minnesota and throughout the Twin Cities, according to the Star Tribune.

Filmmakers David and Nathan Zellner’s Kumiko, the Treasure Hunter—which follows an office worker intrigued by the film Fargo—was shot in Tokyo as well as Newport, Cottage Grove, and Afton, the Minneapolis newspaper reported.