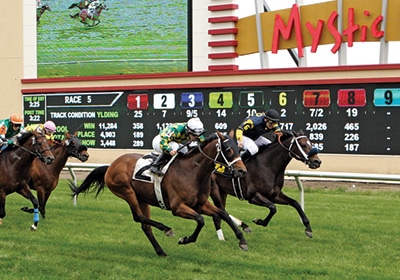 Mystic Lake Deal Seems To Be Delivering Gains For Canterbury

At Canterbury, it's raised bets on raised stakes.
By Kevin Mahoney
December 01, 2013

Minnesota’s one and only thoroughbred racing track saw a record-breaking season this year due largely to a 2012 partnership with one of its competitors—Mystic Lake Casino. Canterbury Park made a deal with the Shakopee Mdewakanton Sioux Community for a purse enhancement and joint marketing agreement, which started to pay out in spades this season.

The arrangement bumps purses for Canterbury track horsemen by $75 million over its 10-year term. This led to a record-setting $12.5 million doled out in purse money this season, nearly doubling 2011 payouts, and about 27 percent more than 2012.

In exchange for the money, Canterbury built a huge Mystic Lake-sponsored electronic tote board. It also agreed to end its legislative quest to allow slot machines at the track. A trolley also runs between Mystic Lake and Canterbury during live racing days.

The intent of the purse augmentations is to attract premier trainers and jockeys—more money means better competition. For the first time since 1991, all of Canterbury’s 1,600 stalls were filled with racehorses.

As the quality and depth of racing has improved, the rate at which favorites won has dropped from 45 to 35 percent. “True fans are looking for competitive races—where the favorites aren’t going to win every race,” says Canterbury spokesman Jeff Maday. “And when favorites win less, betting goes up—because people are adding a second or third horse to their bets; there are just so many different combinations they can cover.”

While daily average attendance was only 1 percent higher than last year, at 6,656, the daily amount wagered on live races was a record-setting $546,532, up more than 20 percent from last year.

About 65 percent of bets were made out of state—$24.4 million of the $37.6 million season total. Off-track wagering, which includes dollars bet on televised Canterbury races from other tracks or bets made through Internet sites (not available in Minnesota), was up by 46 percent this season.