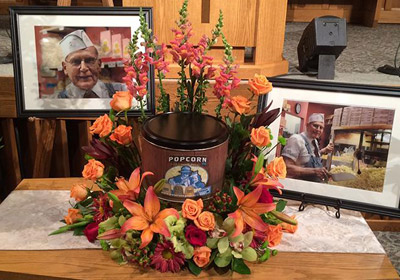 Myron Peterson, The Popcorn Patriarch Of St. Paul, Has Died At 95

At Saturday's funeral, a 2-gallon popcorn tin held the ashes of Peterson, who ran downtown popcorn shops for 30 years with his wife and daughters.
October 24, 2014

Myron Peterson, a gentle bear of a man who ran popcorn shops with his family in the downtown St. Paul skyways for more than 30 years, died Oct. 2. He was 95 and died of pneumonia.

To honor his legacy as the popcorn patriarch, Peterson's three daughters have placed his ashes in a two-gallon popcorn tin, and displayed it on the altar Saturday at his funeral at Riverview Baptist Church in West St. Paul.

“We were trying to decide which urn to use, when we remembered the tin we had with the picture of dad and mom, from their honeymoon,” said daughter Trudy Dye.
“We thought: Oh, Myron would just love that.'”

The popcorn tin/urn has a picture of the Peterson and his wife and business partner, Avis, taken on their honeymoon in 1946. Avis died 12 years ago.

A strong man, Peterson was hefting giant copper kettles of 160-degree steaming caramel until he was 90. And he made lasting friendships at the shop, greeting and conversing with customers and passers-by.

He was very religious: “He'd offer a prayer if people needed it, right in the shop, right then and there,” Dye said. “He was an encourager, always very positive no matter what noise was going on,” she said. “I don't think I ever heard my dad complain.”

Peterson grew up on a Wisconsin cattle and potato farm, then enlisted in  in the Navy and saw action on Iwo Jima and Okinawa during World War II. He returned home to Lewis, Wisconsin, married Avis and ran a creamery. The couple then opened a dairy bar in Spooner.

Later they ran a wholesale sandwich business in the Twin Cities before opening their first popcorn shop in 1977, on the block that was soon demolished for the World Trade Center building.

They moved then to a tiny shop beneath the Victory Parking Ramp on Wabasha Street. In 1981 they expanded, opening a second, larger shop in the old Bremer Building, where they added ice cream to the mix.

Myron's brother, Morris, ran the Wabasha shop until his death in 1993. There was even a third shop for a time, in the Farm Credit Building.

Eventually, the family consolidated with one downtown shop in the U.S. Bank skyway. The death of Avis in 2002 was a blow; for months afterwards, he'd retreat to the shop's back room at times for a quiet cry.

His failing health kept Peterson from working in skyway shop for the past five years. The family closed it last year,  but continues to run a popcorn shop and ice cream parlor in Inver Grove Heights. They also continue to ship thousands of tins of popcorn mix tins each Christmas.

Over the years, the entire family has worked together each December to prepare those popcorn tins for the holidays. Grandchildren joined in the effort as soon as they could walk: “You start by cleaning up, then when you get older you get to do the popcorn,” grandson Jordan Wild said in 2002, when he was 16 and making the popcorn.

Myron Peterson said back then: “It gives the grandkids a sense of work and a sense of family. And they get a little money, too. Of course, I always have to tell them my stories of the Depression, when I pitched hay on a farm all day for 50 cents.”

“That was no surprise: everyone who came expected to get some popcorn,” Dye said.