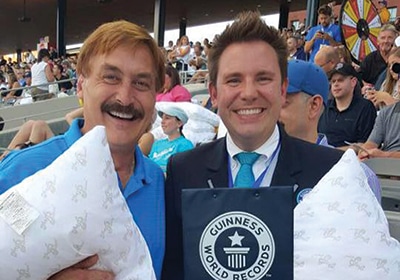 If you think your favorite radio personalities are obsessed with sleep, then Mike Lindell has captured your attention. The CEO of Chaska-based MyPillow has pursued a saturation campaign of the local airwaves to persuade you to buy his pillows because they are endorsed by well-known radio personalities.

“People are tired of phony advertising. When we take on a radio personality like Tom Barnard, Terri Traen, Joe Soucheray, Paul Allen or John Williams,” they’re trusted by listeners, he says. He works one-on-one to help the personalities find pillows that fit their needs. Then they tell their stories on the air about how they’ve overcome stiff necks, restless nights or headaches.

Lindell estimates that he will spend about $45 million on advertising this year, with about 60 percent on television, 30 percent on personality radio and 10 percent on print.

Lindell was “laughed at” by retailers a decade ago when he developed a premium pillow with a patented fill, so he set about marketing it himself. He broke through with TV infomercials, attracted customers, and gained credibility and access to retailers, including Wal-Mart, but recently decided to recalibrate his business model.

“I lost a little control of my company in 2012 because we got so big so fast,” Lindell says. “I don’t need to be in big-box stores.” The privately held MyPillow, which employs 560, has been on a revenue roller coaster. Lindell says it generated $96 million in sales in 2012, dropped to $44 million in 2013 and was back to $54 million in 2014. “We had to cut back, regroup and get all of our systems in place,” he says, explaining that he lacked call- center resources, labor efficiencies and purchasing expertise to support the company’s early growth.

“We made a lot of mistakes in 2012,” he says, but he now has an operation equipped to produce 20,000 Minnesota-made pillows a day. Lindell has ratcheted up advertising and projects $110 million in revenue for 2015.

Lindell appears regularly on QVC, has employees hawking MyPillow at public events, including the Minnesota State Fair, and he has nearly a dozen stores in the Upper Midwest.