According to the U.S. Census Bureau, the Twin Cities fared above average in 2012 with respect to education, income, and housing value, but it still isn’t back to its pre-recession numbers.
October 04, 2013 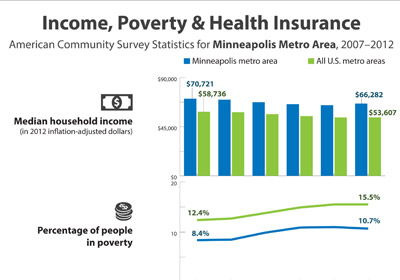 The U.S. Census Bureau reported recently that in 2012, the Minneapolis metro area’s median household income increased, its uninsured rate decreased, and its poverty rate dropped slightly from the year before.

While Minnesota hasn’t completely recovered from the recession, it was still well ahead of the nationwide averages in all three categories. Across all U.S. metro areas, median household income was $53,607 in 2012, barely improved from $53,545 in 2011. Meanwhile, the poverty rate remained about the same from 2011 at 15.5 percent—but it has increased 3.1 percent from 12.4 percent in 2007—and the uninsured rate decreased from 15 percent to 14.7 percent year over year.

The survey also measured local statistics for about 40 different topics, such as educational attainment and housing.

The median gross rent, including utilities, throughout the Twin Cities in 2012 was $895, compared to $925 in metro areas throughout the United States.

More information about the Twin Cities area and how it compares to the nation’s social, economic, and housing characteristics can be found here.