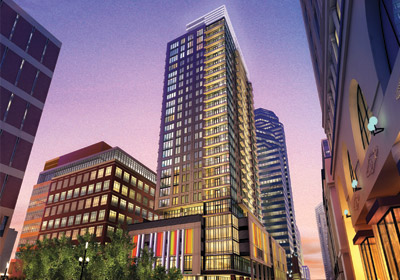 Minneapolis broke a record last year for the total value of construction projects it approved, which together were worth almost as much as the 2010 and 2011 projects combined.
January 18, 2014

Minneapolis issued 12,100 construction building permits in 2013, which had a combined value of $1.21 billion, a new annual record for the city.

According to the city, the recent construction boom is primarily due to rapid growth in rental housing. More than 3,500 permits for residential units—family homes, rental apartments, and new condos—were issued in 2013, up from about 3,300 in 2012 and a huge jump from about 600 units in 2011. To learn more about what’s driving the billion-dollar apartment development market in the Twin Cities, read Twin Cities Business’ October cover story.

“Important national trends are playing out to our advantage in Minneapolis,” Jeremy Hanson Willis, executive director of the city’s department of community planning and economic development, said in a statement. “As more people are choosing to live in thriving urban neighborhoods, Minneapolis is well-positioned to continue this growth in housing and population.”

The top five construction projects to receive permits in 2013 were all housing projects:

“This great news is more proof that Minneapolis is in full recovery and growing faster than most peer cities,” Minneapolis’ newly appointed mayor, Betsy Hodges, said in a statement.