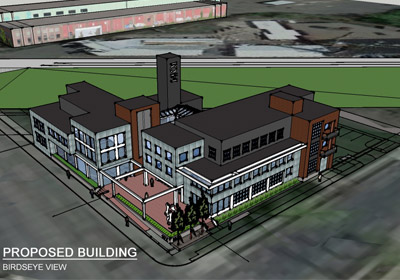 Minneapolis rejected one plan that would've housed Dogwood Coffee and Rustica Bakery and another to draw film-industry tenants; the parcel was taken “off the market.”
July 11, 2014

In December, the city of Minneapolis put out the call for development proposals on a city-owned chunk of land in northeast Minneapolis.

The city drew two competing pitches for new commercial buildings on the long-vacant site at 1401 Central Avenue Northeast. The site is located along Central Avenue in northeast Minneapolis, just a few blocks north of the high-traffic intersection of Central and Broadway Street Northeast.

Minneapolis-based Hillcrest Development proposed a building that would have housed operations for both Dogwood Coffee and Rustica Bakery. Minneapolis-based F-Stop Productions, meanwhile, offered a plan for a new building meant to draw companies connected to the film industry, among other tenants.

But on June 25, the city sent letters to the development groups outlining its decision to reject both proposals, writing: “We will not be recommending (to the City Council) either of the two proposals that we received. . . . We are essentially taking the property off the market at this time.”

Denise Gardner, president of F-Stop Productions, which had proposed a three-story building with 30,000 square feet and expansion options on the site, told Twin Cities Business that her group received no signal from the city that it was going to reject both proposals until the letter landed last week.

“We’ve invested our time, our energy, and our money,” said Gardner. “If we didn’t think they wanted to develop this property, I wouldn’t have submitted this proposal.”

“They wasted everybody’s time,” Gardner added. “This is business development? This is not how you do business.”

Scott Tankenoff, managing partner of Hillcrest Development, could not be reached early this week for comment about the city’s change of heart.

The city had been reviewing the two proposals for four-and-a-half months. It issued its request for proposals (RFP) for the site in mid-December, and the deadline for responses was February 4.

The letter addressed to Hillcrest is available here. Find the letter to F-Stop here.

In the case of the Hillcrest proposal, the city expressed concern that the plan for an 8,500-square-foot building may not have “maximized the site’s buildable potential.” For the F-Stop proposal, the city’s analysis suggested that the proposed project had a financing gap.

The city’s letter also notes: “Another reason for us to take the property off the market at this time is related to questions about whether the property may in the future be needed for transit infrastructure supporting a Central Avenue streetcar or Bus Rapid Transit line.”

The small parcel of land has proven to be a complicated site to redevelop. The site has been sitting empty since 1990 when an industrial warehouse on the property burned. In 2005 a plan surfaced to build a four-story office building on the site, but the deal never moved forward. The triangular site is about seven-tenths of an acre and is next to a railroad line.

Northeast Minneapolis has been a draw for both artists and creative businesses. The city’s RFP for the 1401 Central Avenue Northeast site refers to the Central Avenue Small Area Plan, which notes that commercial properties should “offer opportunities for an arts presence” on Central Avenue.

But for now, the site will remain vacant for the foreseeable future.