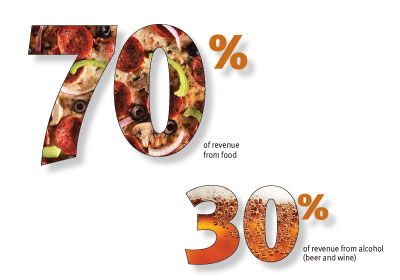 Back in 1983, the City of Minneapolis relaxed its rigid liquor laws by allowing restaurants and other establishments to serve alcohol outside of downtown—if they adhered to a ratio of food to alcohol sales. For restaurants within neighborhood commercial zones, 60 percent of revenue had to be from food. Later, citizens amended the city charter to allow businesses outside of those zones to also sell alcohol as long as they obtained 70 percent of their revenue from food.

Flash-forward a couple decades, and a craft brew pint at the Anchor in Northeast is $5. Its signature fish and chips is $10. Some restaurants charge even more for craft beer, wine and mixed drinks, while serving even cheaper happy hour fare. As spendy craft brewing and mixology reach their apotheosis, but food prices only inch up, many of the city’s restaurants find themselves at risk of losing their liquor license.

The Anchor has offered weekend brunch and take-out options since the beginning. Co-owner Kathryn Hayes credits take-out service in particular for keeping it within the formula. Restaurateur Molly Broder (Broder’s trio of southwest Minneapolis Italian food emporia), who is leading a campaign to strike the ratio language from the city charter, says they don’t curtail alcohol consumption; they just make beer and wine cheaper while raising food prices. And enforcement is spotty at best, she says. Some restaurants are repeatedly cautioned, while others are left alone. None have had a license revoked, says Grant Wilson, business license manager for Minneapolis.

Restaurants are on the offensive. “A fair deal for a square meal” is the slogan of nearly 50 establishments sprinkled across more than two dozen Minneapolis neighborhoods pushing for a charter change, which requires a ballot initiative. (About 70 restaurants are affected.) Meanwhile, there’s a separate push to end the 60/40 ratio, which applies to about 200 other Minneapolis businesses and can be changed by a simple City Council vote.

Wilson is working with eateries to come up with a new definition of “restaurant.” The focus will be on limiting bar space and reducing live-entertainment noise.

For a charter change