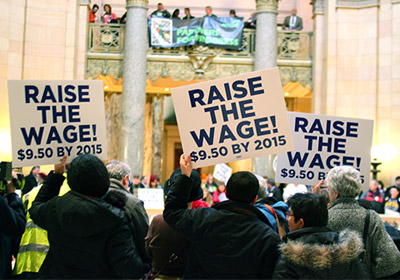 At the crux of the delay in passing an increase is the question of whether to index a new, higher wage to inflation.
March 31, 2014

This is one in a series of articles funded by a grant from the Northwest Area Foundation.

Lawmakers in St. Paul aren’t talking much about increasing the state’s minimum these days, despite an aggressive push from Democratic lawmakers at the start of the legislative session to quickly get a bill to Gov. Mark Dayton’s desk.

An increase in the minimum wage was not part of legislative negotiations this week over passing a tax bill, and after an initial blitz of hearings, the minimum wage conference committee has not met in more than a week.

“The Speaker [of the House] and I haven’t said the word minimum wage in weeks,” Senate Majority Leader Tom Bakk said Tuesday.

At the crux of the delay in passing an increase is the question of whether to index a new, higher wage to inflation.

Senate and House Democrats have agreed to raise the state’s minimum wage from $6.15 per hour for large employers up to $9.50 per hour, but Democrats in the Senate say they don’t have the votes required for passage off the floor if a wage that high is also indexed to inflation.

“I think the issue becomes getting 34 votes on the Senate floor, and so if there’s not enough people who will vote for $9.50 with indexing then we’ve got a problem,” said Sen. David Tomassoni, DFL-Chisholm, a member of the conference committee negotiating the bill details. “We have to make sure we get that ironed out.”


Suburban and rural members dominate the Senate DFL caucus, and many have heard concerns from small businesses and chambers of commerce in their communities about increasing and indexing the wage.

“Businesses are concerned that having an automatic inflation factor is not controllable on their end,” Tomassoni said. “I suppose you could say that about a lot of the products they market or a lot of the products they have to buy, but at the same time, if the minimum wage is something they consider to be a linchpin in whether or not their business goes forward, that’s a legitimate concern for them.”

Freshman Sen. John Hoffman, DFL-Champlin, said he’s heard concerns from across his district that going up to $9.50 per hour and indexing the wage for inflation will put a serious strain on businesses.

“Now you’re telling a private employer we’re going to raise the minimum wage, give that person some time to make adjustments,” Hoffman said. “I’m good starting at $9.50. Lets get that done first and let’s move on.”

Senate Taxes Chairman Rod Skoe says he believes lawmakers should regularly revisit the issue of minimum wage. He opposed indexing a number of provisions in the tax bill last year, he said.

“I’m just not a supporter of doing that,” Skoe, DFL-Clearbrook, said. “I think there’s value in the Legislature revisiting these issues from time to time to make sure they are at the appropriate level, and the way to do that is not index.”

Other senators would prefer not to talk on the issue at all. An intense lobbying effort is underway at the Capitol. Senators believed to be on the fence about increasing the wage have been targeted by labor unions since last year, when lawmakers failed to negotiate a compromise.

“I’m a supporter of minimum wage and I’m going to support what’s negotiated,” Sen. Terri Bonoff, DFL-Minnetonka, said. “I’m not commenting on [indexing] because there’s no benefit other than to know that I’m going to be a green vote. “

On the flipside, the House is bullish about indexing the wage to keep up with the rising costs of living over time. House DFL leadership says a new minimum wage will immediately start losing it’s value after it’s passed, and if history is any indicator, legislative increase to the state’s minimum wage increases don’t come easy and often in St. Paul.

House Democrats have offered indexing the wage to inflation starting in 2017 instead of 2016.

Their latest offer also switches the inflator from the Consumer Price Index (CPI) to the “implicit price deflator,”  which isn’t based on a fixed set of goods and can change from year to year with people's consumption and investment patterns.

But not everyone in the House was initially on board with indexing the wage to inflation.

“I’ve come on board with it. I wasn’t there right away,” Rep. Jeanne Poppe, DFL-Austin, a member of the minimum wage conference committee, said.

“For the long term, I think there’s a benefit to it,” Poppe said. “It’s not just youth that we are employing in minimum wage jobs, we do have people who are trying to raise families, so I’d like to see that as part of the final package.”