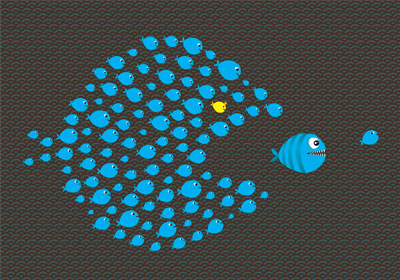 Sometimes, a long-term investor decides to exit a business ahead of schedule, not because the investment disappoints, but because it exceeds expectations. And such a plot twist can lead to some wildly unexpected turns for those running the business— such as suddenly finding themselves leading a division within a public company.

In early 2007, Chris Heim and business partner Dan Mayleben purchased Eden Prairie–based communications software company Amcom Software, Inc., with $30 million in backing from Boston-based Garvin Hills Capital Partners. Through a combination of organic growth and four acquisitions, they succeeded in jump-starting sales, which had been stuck at $11 million to $12 million annually for several years. One could say they overachieved: With revenue reaching nearly $43 million by 2009, Garvin Hill was ahead of plan and decided to cash out early.

Though the private equity market had essentially been shut down for a year, Heim and Mayleben convinced two local investors, Split Rock Partners and Norwest Equity Partners, to invest an undisclosed sum in Amcom in 2010.

Heim thought the two had also secured partners for the next five to seven years to help Amcom crank up growth organically. “These were Midwest guys we could really count on to add value to our company. We were after strategic advice, and we got it,” Heim says, describing why he chose the Twin Cities private equity firms over other bidders.

At that point, Heim says they did not have a specific endgame in mind. “We felt we could grow the company and the exit would eventually take care of itself.”

But an eventual time horizon shrank to less than 15 months when Virginiabased USA Mobility (Nasdaq: USMO), a provider of satellite-based paging systems, offered to pay $163.3 million to acquire Amcom in March. Instead of running a private company with experienced and long-term advisors, Heim and Mayleben now run the strategic growth driver within a publicly traded company, where they get a report card from Wall Street every day.

“What’s so exciting is . . . we represent a huge part of their future. We’ve got the directive to grow the company,” Heim says.

The logic behind the deal is compelling, and Amcom’s role is clear: to reverse USA Mobility’s sliding financials. Revenues have fallen an average of nearly 12 percent a year, from $618.6 million in 2005 to $233.2 million in 2010, while operating cash flow has dropped an average of 10 percent a year, from $139 million to $72.6 million during the same period. The company’s stock, which came out at $38 per share in 2004, has struggled to stay above $15 per share for the past two years.

While ahead of schedule, this is not the first time Heim has made the switch from running a small private company to running a business within a larger, publicly traded company. His earlier venture, High Jump Software, was acquired by 3M Company for a reported $90 million in 2003. Heim stayed on for two and a half years, continuing to run the business from within the Maplewood-based corporate giant.

Looking back over his two software ventures and several different sets of investors, Heim counts himself fortunate in having found partners to help grow those businesses. With everyone focused on the same goal, he asserts that his investors have realized a solid return on their investment. “They’re there to help you grow, not there to do things to the contrary,” Heim says. “You hear more horror stories about venture capital and private equity. It just hasn’t been our experience at all.”

One of Heim’s former investors, Tim DeVries, managing partner at Norwest Equity Partners, looks back on the uncommon deal. “We sold Amcom when it was not for sale,” he explained. “We were not interested in selling the company. Amcom was a very, very unusual situation for us . . . owning something for a year. I can’t think of another situation like that.”

Describing the sale of Amcom as “bittersweet,” DeVries says that “we love our companies, but when an opportunity presents itself, you’ve got to look at it.”