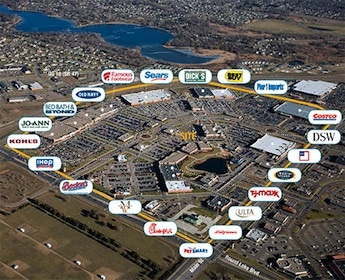 Retail property management firm DDR, which co-owns Riverdale Village in Coon Rapids and 43 other U.S. shopping centers, said Wednesday it will buy out its joint venture partner in a $1.46 billion deal through which it will acquire 30 of the 44 centers.
May 26, 2013

Property management firm DDR Corporation plans to buy out its joint venture partner in a $1.46 billion deal through which it will become the sole owner of Riverdale Village, an outdoor shopping center in Coon Rapids, and 29 other U.S. shopping centers.

DDR is buying the stake now owned by The Blackstone Group, L.P., a private equity firm with which it now co-owns 44 shopping centers across the nation.

Riverdale Village is a 941,336-square-foot retail property whose major tenants include Costco Wholesale, Sears, JCPenney, and Kohl's. The deal is scheduled to close by the end of this year, at which point DDR would assume full ownership of the 30 centers. A DDR spokesman declined to disclose the purchase price for Riverdale Village individually.

DDR plans to redevelop and expand the shopping centers as well as raise tenant rent prices.

“We are very pleased to add these outstanding assets to our wholly-owned portfolio,” Daniel B. Hurwitz, CEO of DDR, said in a statement. “It was our goal to accomplish this upon the initial formation of the venture with Blackstone, and we thank them for being outstanding partners. We look forward to our continued relationship.”

DDR plans to fund the $1.46 billion deal by issuing 32 million shares of common stock with a potential addition of 4.8 million shares. These shares will fund part of a $566 million cash payment to Blackstone. The offer includes the option for DDR to issue common shares to Blackstone, worth $250 million.

Publicly traded retail property management firm DDR, based in Beachwood, Ohio, owns and manages 445 retail properties in the continental United States, as well as in Puerto Rico and Brazil. It employs 650 individuals, 450 of whom are based in Ohio. DDR reported $800.4 million in revenue for the 2012 fiscal year, which ended December 31—up 6.8 percent from the 2011 fiscal year.

New York-based Blackstone is an investment and equity firm that employs 1,800 individuals in 24 offices nationally and internationally. It reported $210 billion in assets under management in 2012, a 26 percent increase from 2011.