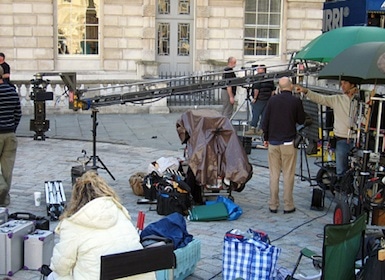 MN Film Board Under Fire; Auditor May Scrutinize It

Critics of the Minnesota Film & TV Board are troubled by the dearth of production crews coming to the state and the board may be under a microscope during this year’s legislative session.
January 24, 2014

Critics of the Minnesota Film & TV Board are troubled by the dearth of production crews coming to the state and the board may be under a microscope during this year’s legislative session, the Star Tribune reports.

Legislative Auditor James Nobles tells the newspaper complaints about the board have picked up since lawmakers provided $10 million last year to attract projects to Minnesota. Its director tells the Star Tribune the Film Board runs a tight ship, is cost-effective, and welcomes an audit.

The 1990s were heady days for Minnesota’s film industry, with major productions such as “The Mighty Ducks,” “Fargo,” and “Grumpy Old Men” providing plenty of jobs and spending. But, as the Star Tribune explains, Canada’s decision to provide 50 percent rebates on spending by film and television crews changed things.

Now many U.S. states have similar rebate programs. Louisiana, for example, is providing a 30 percent tax credit to the makers of “Homefront,” an action movie based on a book that was set in Minnesota, the paper reports.

The Minnesota Film & TV Board says its Snowbate program can provide rebates of up to 25 percent on eligible expenditures.

The Motion Picture Association of America has a state-by-state breakdown of incentives for the film industry. It puts Minnesota’s reimbursement rate at 15 to 20 percent of production expenses. The Association says that in 2010 and 2011 there were 7 movies and 11 TV series filmed in the state.

One of the states that’s invested more heavily in film production is Michigan. The Association says they offer tax credits of up to 42 percent of a production company’s expenditures. Michigan attracted 56 movies and 7 TV series during 2010 and ’11, according to the MPAA site.

One of the markets that sounds happy with its film investment is San Francisco. According to a controller’s report this month, each dollar provided to film producers through the city’s rebate program is generating $18 in local spending.

The Star Tribune reports some of the questions questions that may come up in a review of the Film Board include  whether a state-run board would work better than the current private, non-profit version. Another is whether Minnesota’s comparatively modest $10 million allocation will really lure anything when states such as Michigan are budgeting nearly $400 million for film production.

Minnesota Film & TV Board director Lucinda Winter said last summer the Snowbate program won’t bring blockbusters to the state but could help land small to mid-sized productions. Winter said last month Minneaepolis is being scouted as the location for an American adaptation of the British television hit “The Fall.”