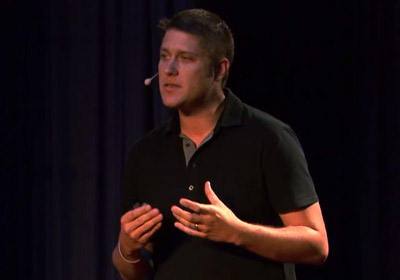 Mike Derheim challenges the idea that Millennials lack a good work ethic, suggesting instead that business leaders must replace the traditional “command and control” model with one of “empowerment.”
October 26, 2013

In a recent speech before a live audience, the chief executive of a Bloomington-based Web development firm posed the following question: “What if everybody in your company was a co-president?”

Mike Derheim, who co-founded The Nerdery nearly a decade ago, spoke during a recent “TEDx” presentation in Minot, North Dakota. (A video of the speech appears at the end of this article.) TEDx is a series of local, self-organized events that are modeled after the popular TED Talks platform, which comprises a series of global conferences and features a diverse set of experts who discuss “ideas worth spreading.”

Derheim spent much of his speech attempting to debunk the common refrain that the young Millennial generation lacks a strong work ethic or is flawed due to its sense of entitlement. He challenged the idea that an entire generation would lack pride in what they do.

Instead, Derheim suggested that business leaders have “forgotten how to engage our workforce,” adding that “the evidence of disengagement is absolutely everywhere.”

Citing his own experience, Derheim said that “engaged young people are the absolute lifeblood of The Nerdery.” The firm has roughly 450 employees, affectionately referred to as “nerds,” and its success stems from the “co-leadership” of all workers. Derheim described his company’s model of “distributed leadership,” through which each employee is deemed a “co-president.”

The logic behind such an atypical structure: Derheim said that presidents are generally expected to be the most engaged in a business and most motivated to a see it thrive.

Too, Derheim decried a common shift toward increased company rules and regulations and suggested that such limitations should be reduced in favor of focusing on “measuring what matters.” The measure of a president is the success of the company—not the amount of time he or she spends, say, on Facebook while in the office. Today’s workers get that, and they become disengaged when encountering “useless rules and outdated policies,” according to Derheim.

The traditional model of “command and control is dead,” he added, and it’s been replaced with “empowerment.”

“I believe that if we embrace the idea that people need to be empowered to be engaged, we can take this thing that we complain about—this ‘entitlement’ thing—and actually make it one of our biggest cultural assets,” he said. “But we have to make a shift in order to take advantage of it.”

In fact, Millennials are “absolutely yearning to be empowered,” and the sense of ownership that accompanies a title like “co-president” has led to success at The Nerdery, Derheim said.

For more about Derheim’s philosophy and how it has benefitted The Nerdery, view the complete TEDx talk below:

Learn more about The Nerdery here. For a Twin Cities Business feature story about the unique attributes of Millennials and other generations, click here.