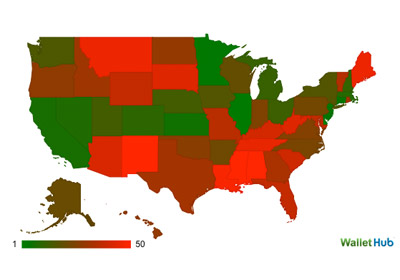 Taking into account returns on taxpayer investment, how much each state receives in federal funding, and the ratio of federal employees, WalletHub ranked Minnesota third on its list of states least-dependent on the federal government.
April 06, 2014

A recent study found that Minnesota is less dependent on the federal government than all but two other states in the country.

The study measured a state’s return on taxes paid to the federal government, federal funding as a percentage of a state’s revenue, and the number of federal employees per capita in each state. In ranking the states, the study weighted the first two metrics twice as important as the third.

According to WalletHub, those three metrics “best elucidate each state’s true financial independence, or lack thereof, from the federal government.” Minnesota ranked as the third-least dependent state.

The report said states that tend to vote Democrat were on average less dependent than Republican states—and of course, higher state taxes may allow for less dependency on the federal government.

WalletHub used data provided by the IRS, the U.S. Census Bureau, Transparency.gov, and the U.S. Department of Commerce.

The return on taxes paid measures how many dollars in federal funding a state’s taxpayers receive for every dollar in federal income taxes they pay. Minnesota ranked as the second-least dependent in return on taxpayer investment with taxpayers receiving $0.56 on each dollar they contribute. Delaware ranked first in the category at $0.50, and South Carolina ranked last at $7.87.

Minnesota ranked 12th based on funding as a percentage of its revenue, at 28.5 percent. Alaska ranked first in the category at 20 percent and Mississippi ranked last at 45.8 percent.

Delaware topped the list overall as the least-dependent state, followed by Illinois. After Minnesota was New Jersey then Connecticut. Mississippi and New Mexico tied for most-dependent state. See the full list here.