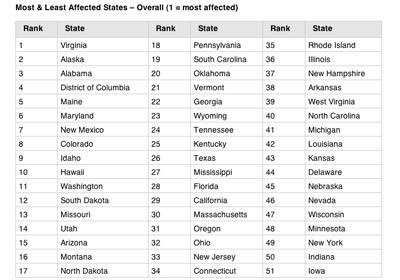 MN Among Least-Affected States During Shutdown

Although a large group of federal employees in Minnesota may be laid off in the coming weeks, a recent report said Minnesota is the fourth-least affected state by the government shutdown.
October 18, 2013

Minnesota officials recently announced that more than 100 state employees may be laid off due to the federal government shutdown, although a recent study estimated that Minnesota is among the states least affected by the shutdown.

Minnesota Management and Budget (MMB) notified about 105 Minnesota Department of Health employees Monday that they may be laid off if the federal government doesn’t get up and running before state funds are exhausted.

The state said it expects the duration of the layoffs to be short-term and that the employees will be able to return to their jobs when the budget dilemma is resolved. The majority of the affected employees are reportedly nurses, whom expect to be laid off on October 18. The remaining portion of the 105 workers could be out of work by October 25.

The Minnesota National Guard, however, announced Monday that it is recalling nearly all of its more than 1,200 full-time federal technicians that were furloughed on October 1. In fact, just four technicians remain furloughed until the shutdown ends.

MMB said last week that 3,000 state workers depend on federal funds, and thus their jobs could be in jeopardy as a result of the shutdown.

While Minnesota is clearly feeling the effects of the shutdown, personal finance social network WalletHub released a report Tuesday that ranked the state the fourth-least affected in the country.

The most-affected state was Virginia, followed by Alaska, Alabama, Washington, D.C., and Maine. The Midwest managed to stay largely out of the fray, holding five of the bottom seven slots—Iowa was the least affected, followed by Indiana, New York, Minnesota, Wisconsin, Nevada, and Nebraska. Although South Dakota was 12th most-affected and North Dakota was 17th.

A major factor in the ranking was a state's concentration of federal employees, although, more than just federal workers are being affected by the shutdown. The list also took into account which states had the most significant federal contracts and also areas that house large populations of people at risk of losing key federal funding—such as students, small business owners, seniors, and veterans.

Virginia, Washington D.C., Maryland, and Alaska were all among the top five states in federal workers per capita and most federal contract money per capita.

Small business owners, who have been unable to garner SBA loans, were hurt most in the Dakotas, Colorado, and Alaska, which had the highest small business borrowing rates in recent years, according to WalletHub. Minnesota ranked 19th on that measure.

The effects of the shutdown become more pervasive the longer it’s sustained. The Los Angeles Times reported that if the lights stay out for weeks, it could hurt the housing recovery by inhibiting lenders from using IRS documents to confirm borrower qualifications. The Federal Housing Administration was one of many government agencies hit with employee reductions, and the smaller workforce may cause delays in the processing of loans for potential buyers.