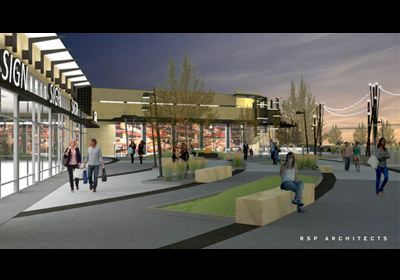 City officials unanimously approved plans for City Place, which will feature a grocery store, other retail, a hotel, office buildings, and more; work will begin this fall.
August 17, 2014

The City of Woodbury has given developers the green light for a large mixed-use project that will revive the long-vacant, 100-acre site that was formerly home to State Farm Insurance.

The campus, located at the corner of Radio Drive and Highway 94, includes a large office building that has been vacant for about a decade. There were several unsuccessful attempts by various companies and investors to acquire and redevelop the property prior to the latest plan, which is called “City Place.”

Minneapolis-based Kraus-Anderson and Florida-based real estate investment firm Elion Partners, who joined forces to develop the City Place plan, said that the City of Woodbury unanimously approved the mixed-use project, and work on the site will commence soon.

Elion Partners Managing Principal Shlomo Khoudari said in a statement that the project has “already awoken interest from corporate users.”

Matt Alexander, Kraus-Anderson’s director of real estate development, described the city’s final approval as “a most important step in realizing the ‘work-play-live’ concept behind the development plan of City Place.” He said Kraus-Anderson expects to start site work on the multi-phased project later this fall.”

The Woodbury City Council approved a rezoning to allow for retail on the property, which was previously zoned only for office use. The council’s vote was the final step before developers could finalize acquiring the property from State Farm Insurance, the former occupant of the site, the Woodbury Bulletin reported. The initial phase of construction will reportedly include the grocery store and retail building component, and the entire project is expected to be finished within three to four years.

Meanwhile, Kraus-Anderson is also planning to build a new 80,000-square-foot headquarters in downtown Minneapolis, for an estimated cost of $16 million. It will house about 250 total employees and will have room for future expansion.