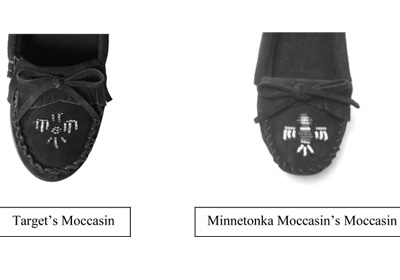 Minnetonka Moccasin said Target began selling shoes with “a beaded thunderbird design nearly identical” to its own design after the Minnetonka company passed on an opportunity to sell its products in Target stores.
October 07, 2012

Minnetonka Moccasin Company, Inc., is suing Minneapolis-based Target Corporation for allegedly infringing on its trademarked thunderbird design, which appears on the company’s moccasins.

Minnetonka Moccasin said in its suit that it produces shoes, clothing, and accessories, including its “well-known moccasin shoe with the iconic thunderbird design.”

Minnetonka Moccasin said it has used the thunderbird design for 40 years. In November 2011, Target contacted the company and proposed selling Minnetonka Moccasin shoes, using “prime real estate on the floor” of Target stores, according to the suit. But the Minnetonka company said it “promptly and politely passed on the sales opportunities presented by Target.”

Furthermore, “customers and potential customers are likely to believe there is sponsorship, approval, affiliation, connection, or association between” the two products, according to the lawsuit.

Minnetonka Moccasin’s complaint, which was filed in U.S. District Court in Minnesota, names as defendants both Target and E.S. Originals, Inc., a New York-based company that allegedly supplied Target with the “infringing moccasins.”

Target spokeswoman Jessica Deede on Thursday declined to comment on the lawsuit, “given that it’s pending litigation.”

Scott Johnston, patent and trademark attorney at Merchant & Gould in Minneapolis, told the Star Tribune that lawsuits involving infringement in fashion design are often difficult to win, but Minnetonka Moccasin’s lawsuit focuses on the thunderbird logo, as opposed to the moccasin itself, which makes the claim stronger.

Target has faced similar accusations before: In 2010, the retail giant reached a settlement with luxury handbag maker Coach, after the company sued Target for selling handbags that too closely resembled Coach's signature products. Terms of the settlement were not disclosed.

Target is Minnesota’s second-largest public company based on revenue, which totaled $69.9 billion in its most recently completed fiscal year.