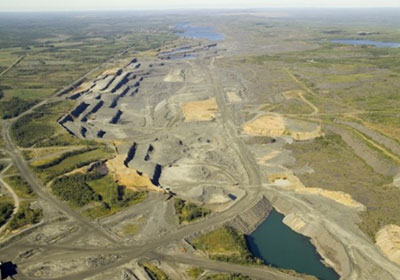 In comments submitted to the MPCA, environmental officials at the Fond du Lac and Grand Portage bands pointed out that the water permit does not set specific limits for sulfate, mercury, copper, nickel, zinc or cobalt in water leaving the mine site.
December 11, 2015

Tribal and environmental groups say the state’s plan to allow expansion of a taconite mine raises the same concerns as the prospect of copper-nickel mining in northeastern Minnesota.

Northshore Mining Company wants to enlarge its 12-mile-long taconite pit near Babbittinto an area that contains sulfur-bearing rock, the same type of rock that would yield copper, nickel and precious metals for the proposed PolyMet mine just a few miles to the south.

The Minnesota Department of Natural Resources decided in April that a detailed environmental study of the project was not needed. After reviewing more than 1,000 public comments, the DNR ruled that environmental effects would be addressed in permits [PDF] issued by the DNR, the Minnesota Pollution Control Agency, and the U.S. Army Corps of Engineers.

That permitting process has started, and tribal and environmental groups are crying foul. The mine operates with two main permits, a Permit to Mine from the DNR, and a water permit from Minnesota Pollution Control Agency. The MPCA does not plan to update the water permit. The agency said that permit, which was issued in 2009 and expired last year, “adequately addresses” the risks involved in uncovering sulfur-bearing rock.

No specific limits set out
But in comments submitted to the MPCA, environmental officials at the Fond du Lac and Grand Portage bands pointed out that the permit does not set specific limits for sulfate, mercury, copper, nickel, zinc, or cobalt in water leaving the mine site — metals that often leach from sulfur-bearing rock when it is exposed to water. Instead, the permit requires the company to monitor the water it discharges into the environment.

“Without permit limits, there are no consequences for the discharger and violations of Minnesota water quality standards can continue as long as they are merely reported,” said Margaret Watkins of Grand Portage and Nancy Schuldt of Fond du Lac.

Water Legacy, an environmental group, made similar complaints in its comments to the agency.  Attorney Paula Maccabee said in an interview, “MPCA has identified the problem, but it hasn’t set any regulatory standards at all.”

Maccabee worries that the Northshore mine could end up producing the same kind of pollution that’s being discharged from the nearby Dunka site, where several decades ago LTV exposed sulfur-bearing rock and did not isolate it properly from the environment. Elevated levels of copper, nickel, cobalt and zinc have been draining from the site for years.

EPA says new permit is needed
A new water permit for the Northshore mine was near the top of a priority list laid out by the state and federal governments back in 2012. The federal Environmental Protection Agency has been pushing the state to address a backlog of expired mining permits, but the MPCA has been unable to hire enough new staff to do the work.

The MPCA is taking a new tack and requiring Northshore to monitor nearby wetlands and compare them to more distant wetlands that are not affected by the mine. The agency has only imposed this requirement on one other mine, Hibbing Taconite, less than a year ago. Both mines will be required to submit annual reports on their monitoring results.

A new hydrologist was hired to design the monitoring requirements, according to Catherine Neuschler, supervisor of MPCA’s Agency Rules Unit.

Meanwhile, the Minnesota Department of Natural Resources is working on an amendment for Northshore’s Permit to Mine, which will include a plan to manage the sulfur-laden waste rock; the company is expected to minimize contact with water by piling it on crushed rock and covering it with a liner topped with soil. The completed pile is expected to cover 153 acres.

Three other environmental groups – Save Our Sky Blue Waters, Save Lake Superior Association, and Wetlands Action Group — are challenging the DNR’s April decision not to do a full environmental review. The Minnesota Court of Appeals upheld the agency’s ruling; the groups have appealed to the Minnesota Supreme Court.

In July, Water Legacy petitioned the federal Environmental Protection Agency to withdraw Minnesota’s power to grant water permits for mining projects, citing the backlog of expired permits and the variances routinely granted to taconite mines. The EPA is considering whether to conduct an investigation.